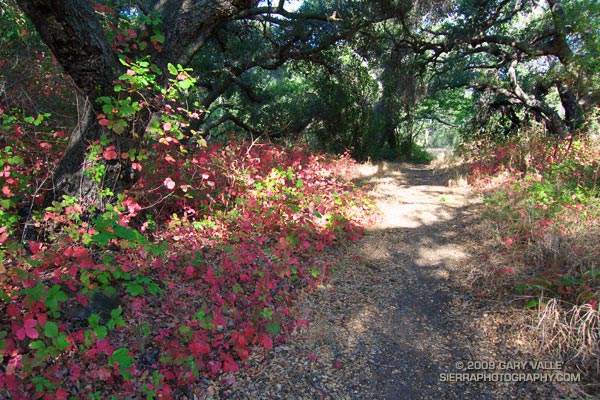 Since nearly all my weekday runs are in the afternoon, on Summer weekends I usually like to escape the heat and do a run in the mountains — the higher, the better. But today even the mountains were going to be hot. Hot enough that the National Weather Service had issued an Excessive Heat Warning for a combination of heat and humidity that would “create a dangerous situation in which heat illnesses are likely.”

It would be cooler at the higher elevations of the Sierra, but there was good chance of thunderstorms developing along the crest of the Sierra, as well as most of the higher mountains of Southern California. Considering the options, I finally decided to do an early morning run in Pt. Mugu State Park. If I was going to run in the heat, it might as well be a scenic run close to home. Maybe the weather in the mountains would be better next weekend.

There are many excellent courses at Pt. Mugu State Park. The course I was doing today is a “backward” variant of the Boney Mountain Half Marathon Course — up the Old Boney Trail, down to the Danielson Multi-use area, up Ranch Center fire road to the Hidden Pond Trail, and then back on the Upper Sycamore Trail. Water is normally available at Danielson Multi-use area and at the start of the Upper Sycamore Trail.

I should have started the run at dawn, but instead ambled along a section of the Satwiwa Loop trail at sunrise. The light was muted and golden, stretching my shadow well out on the trail ahead. Cool trickles of air filled each dip and gully and I wondered how long the temperate conditions would last. Ironically, the last time I had done this course it had been blustery and cold, and there had been snow on the mountains above Ventura. Not today…

It was warm running up the east facing section of the Old Boney Trail, but not yet hot. The crags to the west of the Danielson cabin site, gleamed in the morning sun, and for a brief instant I debated climbing the ridge. The impulse passed, and once over the shoulder of Boney Mountain, I thoroughly enjoyed the (mostly) downhill running through the Boney Mountain Wilderness to the Blue Canyon Trail junction. Cool air draining from the shaded slopes of Boney Mountain kept temps reasonable in the canyon, and the running was good all the way to the Danielson Multi-use area.

At the Multi-use area there is a choice. The coolest and most direct route to the Upper Sycamore Trail is up shaded (and paved) Sycamore Canyon road. But with the Mt Disappointment race looming, I wanted to get in more time and elevation gain, so opted for the longer, more exposed route up the Ranch Center fire road, and then along the ridge on the Hidden Pond Trail. Yes it was hot, and the humidity was up a bit, but it was still scenic and enjoyable in a “I’m not going to let the heat get to me” kind of way. And I knew a water faucet was waiting for me at the point where the Hidden Pond Trail rejoins Sycamore Canyon road, and the Upper Sycamore Trail continues eastward.

Maybe it was the heat, or maybe the coyote had learned to scavenge food from hikers — whatever the case the coyote ahead of me on the Upper Sycamore trail didn’t seem to be in any particular hurry to get off the trail. Coyotes are an odd sort, very intelligent and adaptable, but in my experience not normally any kind of threat.

Usually they will scurry away from a runner. This coyote wasn’t scurrying anywhere. I picked up the pace and clapped my hands, and eventually the animal grudgingly took cover to the side of the trail. But, as it turns out, only about 4 feet off the trail. This was odd, brazen behavior, and I kept a wary eye as I passed.

The final challenge of the morning was the hot climb up to Satwiwa on the Danielson road from the end of the Upper Sycamore Trail. The hill isn’t long or particularly steep, but it faces directly into the sun. With the heat of the day building, it wasn’t easy.

Overall it was an excellent run that would have been even better with an earlier start. Here’s a Cesium browser View of a GPS trace of the approximately 14.5 mile route.