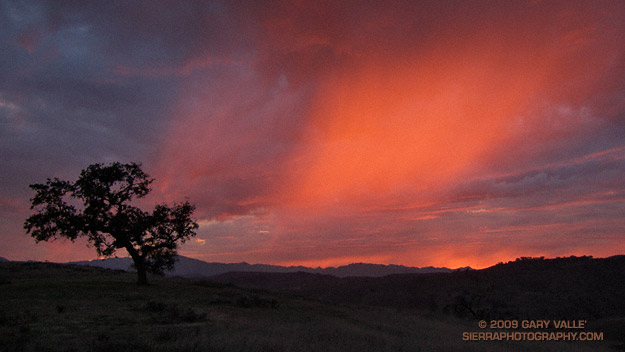 Some outstanding evening runs this week. Did a FiveFingers run out at Ahmanson on Tuesday, and as sometimes happens this time of year, didn’t make it back before dark. Was up on Lasky Mesa in the fading light, with endorphins at full flow. In a distant grove oaks I could hear a Great Horned Owl, and with each hoot-whoo it seemed the zeal of the day was turning to the tranquility of the night. The running was effortless and ethereal.

This evening’s run was also superb. Over the course of the run, the skies had become increasingly gray and troubled, as a weak cold front approached the area. Climbing a long hill, the light was dank, and I had given up on the sun. But as I neared the crest of the hill, orange-red sunlight began to illuminate the clouds from below, highlighting a sunset shower. Large, cold rain drops began to patter around me, and I watched mesmerized, as the light, clouds, and rain played on the sky.