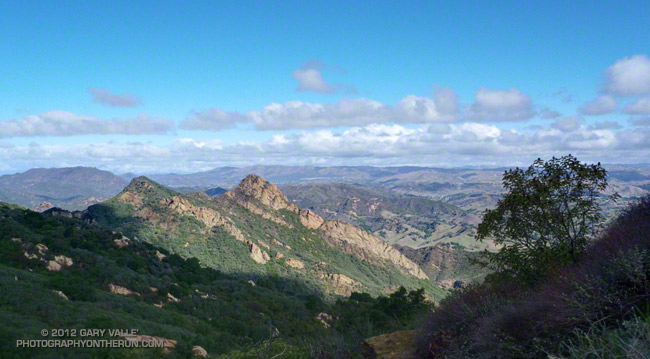 BIG. That was my first impression when I saw the animal loping across the road. Quite a bit bigger than a coyote or bobcat, with a long black-tipped tail. It was a mountain lion, and it was reacting to me before I’d even seen it. Had I rounded the corner a couple seconds later, I never would have known it was there.

I was on Castro Mtwy fire road, between the top of the Bulldog climb and Corral Canyon Road. Just a few seconds before I’d been kneeling on the ground photographing snow pellets (graupel) along a road cut. I’d just started to run again when I saw the lion. It was 40-50 yards away and crossing the road left to right, diagonally down the road. It seemed interested in avoiding me, and I reinforced this idea by clapping my hands and yelling. It was moving at a speed that fit the situation — faster than a walk or trot, but by no means wasting energy or overly concerned. I watched as, like a ghost, it disappeared into the thick chaparral along the south side of the road.

I didn’t want to overreact. Although we usually don’t see them, anyone that runs in the open space areas of the West has likely been watched by a mountain lion. Attacks are extremely rare and often have extenuating circumstances. Even for someone that spends a lot of time outdoors, there are much higher risks in their lives, such as driving to the trailhead. And there are other risks on the trail. Two of my trail running friends have been run down by startled deer, and I was nearly trampled when I spooked a band of horses grazing in a natural cul-de-sac!

In this particular set of circumstances I didn’t think it would be any more dangerous to continue down the road than to retreat. If the animal was interested in me it wouldn’t matter which direction I went. The Corral Canyon parking area was about a half-mile away, and chances were good there would be hikers there.

But it was going to be unnerving to pass the spot where the lion had gone into the brush. For sure I was not going to run past the spot — as any owner of a cat knows, that can elicit a response. Had I seen a stout stick or branch nearby I would have grabbed it. Not only for defense, but to look bigger.

I jogged down the road a little further and stopped. On max alert and facing the threat, I walked past the point where the lion had entered the brush. Once past this point, I began to walk a little faster, constantly checking the road and brush to the side and behind me. After about 50 yards I transitioned to a slow jog, and sometime after that resumed my normal downhill pace, all the time being very wary of any sound, noise or motion behind me.

One car was parked at Corral Canyon, but its owner was nowhere to be seen. Still on edge, I continued on the Backbone Trail into the rock formations east of the parking area, and then past the rock gateway onto Mesa Peak Mtwy fire road. The farther I got from where I’d seen the lion the better I felt. I really didn’t think the lion was interested in me, but was still glad to have the Corral Canyon parking area between me and the cat.

As I ran along Mesa Peak fire road, I started to calm down. I had just passed the “Morrison” caves and rock spiral and was rounding a corner when, without warning, there was a blur of brown from the left. Three deer bounded across the road just feet away. Put my heart back in my chest!

Deer are very common in Malibu Creek State Park, but I normally see them in the grasslands down in the valley. This morning I’d seen deer tracks going up Bulldog. Whenever I see deer tracks it’s a reminder there might be a mountain lion in the area. That was certainly the case this time!