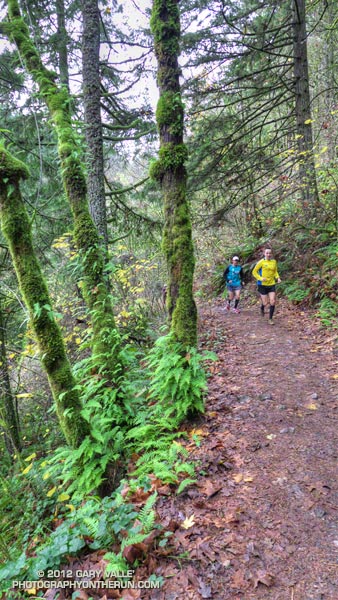 Even by Pacific Northwest standards it had been wet. Over the past five days Portland had recorded over four inches of rain. Earlier in the week heavy rain and strong winds had pummeled the area — flooding roads, toppling trees, causing numerous traffic accidents and leaving thousands without power.

Today, Thanksgiving Day, was the first in several that no rain was forecast. Taking advantage of the good weather our Thanksgiving Day — and that of many Portlanders — started with a hike at the Hoyt Arboretum.

My run on the Wildwood Trail started at Fairview, at the end of a loop hike in the arboretum that had taken us to an overlook with a view of Mt. St. Helens — and on a clear day — Mt. Rainier and Mt. Adams. I had promised to be back to the house in “about two hours ” so the plan was to run north on the Wildwood Trail for about an hour and then head back.

Trail runners love running new trails — especially trails as beautiful and well-maintained as the Wildwood Trail. The 30 mile long trail is just part of a 70+ mile system of trails in a 5100 acre urban park managed by the Forest Park Conservancy.

I was amazed — after all that rain the Wildwood Trail was in great shape. My socks were dry and my running shoes were just a little damp around the edges. The running was superb. I’d run down to Burnside, up to Pittock Mansion, and then down to Macleay Park. Continuing to descend, I’d run along Balch Creek and past the iconic Stone House.

The theme was green on green, with towering Douglas-fir, hemlock and cedar. A mixed understory of alder and maple was highlighted by mosses, ferns and remnant splashes of yellow, orange and brown.

At Wildwood’s junction with the Aspen Trail I was about 55 minutes out. Time to start thinking about turning around. I ran a few yards down the Aspen Trail, then decided I’d rather stay on the Wildwood Trail.

It had been just four days since I’d run a 50K in Kernville, California, and I knew I was going to be slower on the way back. At some point soon I really would need to turn around. I started up some switchbacks, wondering what was on the trail ahead…