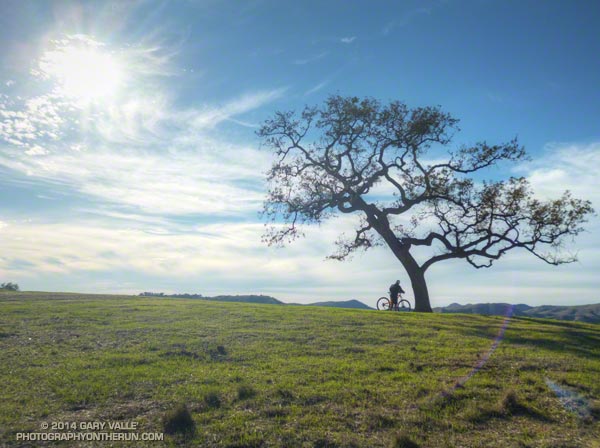 The “Mortar Pothole” is a water feature in the Simi Hills I’ve been monitoring on runs for more than 13 years. Its likeness to a mud puddle is deceiving; it typically has water from October or November into August — a period of 9 to 10 months!

I’ve never seen the Pothole dry in the middle of a rain season, even during 2006-07, the driest water year on record in Los Angeles. But on February 17, 2014, following a 10 month period in which Los Angeles received only 1.2 inches of rain, the Pothole was dry and would remain dry until recharged by the 4+ inches of rain the area received from February 26 to March 2.

Now that the Pothole has been refilled and its groundwater sources at least partially replenished, water should persist in it well into Summer. 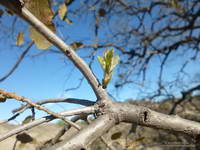 Because I’ve been doing longer weekday runs I had not run past the blue oak at Ahmanson Ranch in a few months. Located north of Lasky Mesa, the tree may be one of the southernmost blue oaks in California. Regional climate modeling suggests that over the next century the range of blue oak may shift northward and diminish to nearly 60% of its current range, making the Ahmanson blue oak a potentially important bellwether of climate change.

After the recent rainfall I happen to run by the blue oak. Still in Winter dormancy, the tree had dropped many of its leaves and looked threadbare. Valley oaks in the area already had a flush of new, green leaves. Although the blue oak is very drought tolerant I wondered if the long period of dry weather might have claimed another victim.

A closer look at the blue oak’s limbs on another run revealed tiny leaf buds, and some sprouting leaves. That was a relief — the Ahmanson blue oak appears to be surviving the drought and will soon sport a new suit of leaves!

I checked on the blue oak on March 24th and its flush of new leaves were coming along nicely. This natural cistern, in the same drainage as the blue oak, still had water on March 18th.

Even before our recent storms, small pools of standing water had developed in a few places along Las Virgenes Creek in Upper Las Virgenes Canyon. There are a number of springs along the creek and perhaps the suppression of plant growth by the drought and lower Winter evaporation rates created the pools.

From late Thursday (Feb 27) until late Saturday (Mar 1), the Cheeseboro Remote Automated Weather Station, located on a ridge on the west side of the canyon, recorded 4.26 inches of rain.

Surprisingly, the pools and the creek didn’t look much different before and after the rain, and there was no evidence of surface water flow in the creek bed at the crossing just north of the Cheeseboro connector. The drainage above this point, dessicated by months of drought, absorbed many millions of gallons of rainfall!

This was not the case for all small creeks. Garapito Creek in Topanga State Park appears to have flowed for a period during the storm, but only puddles remained in the creek bed on Sunday, March 2.

Some larger local creeks peaked at flows not observed since March 2011. According to preliminary USGS data Sespe Creek at Fillmore peaked at 6,180 cfs and Calleguas Creek near Camarillo peaked at 2,970 cfs.

One thing that was very different at Las Virgenes Creek following the rain was the dramatic increase in the number of calling chorus frogs.

The vernal pools on Rocky Peak are another water feature I’ve monitored for many years. They result from small scale aquifers in the sandy soil becoming saturated and occur during most rain seasons with normal rainfall. I have not had a chance to check them yet, but suspect that as in the case of Upper Las Virgenes Creek, most of the rainfall was absorbed by the very dry soil.

On March 19th I checked a group of vernal pools on Rocky Peak. One of the larger pools did contain some water. Based on the recession rings around the pool, it was being quickly absorbed. A week later, March 26th, I checked a pool in another area of Rocky Peak and found that it had recently contained a little water, but none remained.