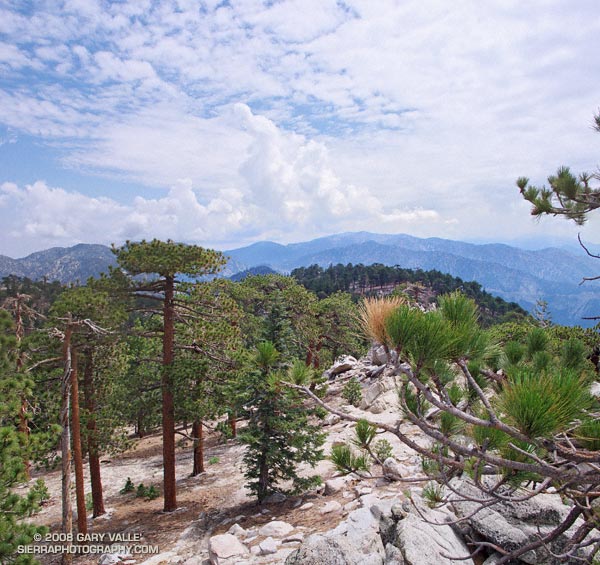 Having been caught in such thunderstorms while climbing in Yosemite, running in the San Gabriels, and running at Mt. Pinos, I do my best to avoid the beasts. Sometimes, it is not an easy thing to do.

Take this weekend for example. I have a 50K race coming up, and in addition to increasing my weekday mileage, I needed to do a Sunday run of about 20-25 miles — preferably in the mountains.

The Sierra was out. A monsoon pattern virtually assured widespread, and possibly severe, thunderstorms. Some forecast models were saying that the focus on Sunday might be the Ventura County mountains, so Mt. Pinos — the site of my most recent thunderstorm adventure — was also out. Both San Gorgonio and San Jacinto had been hit pretty hard on Saturday. That left the San Gabriels, and thunderstorm activity was expected there as well.

Running up the Mt. Waterman Trail, one of my ever-optimistic running partners voiced, “Hey, have you heard about the unusual number of lightning deaths recently?” So far it had been a spectacular day. A broken layer of mid-level clouds — remnants of yesterday’s storms — shrouded the sky. By keeping things a little cooler, the clouds had delayed the development of today’s thunderstorms.

We had started at Three Points and run up the Pacific Crest Trail to Cloudburst Summit, then down into Cooper Canyon, where we left the PCT and ascended the Burkhart Trail to Buckhorn Campground. In Cooper Canyon it was obvious there had been heavy rain the day before. Everything was wet, and the willows and lupines along the creek glistened in the muted morning sun. Rivulets of rainwater had incised rills in the trail, pushing pine needles and other debris into patterned waves.

I had already lost the “when it would start raining” bet. I had said 11:00. It was 11:00 now, and still there was very little cloud development. So little in fact, we decided to do a quick side trip to Mt. Waterman (8038′), and jokes were being made about the rain gear in my pack. (My GoLite 3 oz shell made a huge difference in the severe thunderstorm on Mt. Pinos.)

About the time we summited Waterman, things started to cook. The canopy of protective clouds was beginning to thin and dissipate and some cumulus cells were starting to build. I wondered if we would make it back to the car before it dumped.

We didn’t. About 30 minutes later, as we worked down the back side of Mt. Waterman toward the junction with the Twin Peaks trail,  we heard our first grumbling of thunder. In another 30 minutes it started to rain; slowly at first, with large icy drops, then building in intensity, as prescribed in long established thunderstorm protocols. Periodic claps of thunder echoed overhead, and to the north and east.

About 3 or 4 miles of trail remained. Here, the trail winds in and out of side-canyons and for the most part is well below the main ridge, but at some points it is very exposed. Minutes before, we had run past a lightning scarred Jeffrey Pine. Burned and blackened, the bolt had killed the tree. I pick up the pace and try to put the tree out of mind.

It rained hard for a while and then the intensity diminished. The air temperature didn’t drop and the wind wasn’t strong. It seems most of the lightning is cloud-to-cloud and away from us. I’m drenched, but happy — instead of being fierce and frightful, this thunderstorm has been almost puffy-cloud friendly.

In steady rain, we cross Hwy 2 and jog up the trail toward the Three Points parking lot (5920′). As we near our cars, we’re startled by a loud boom of thunder directly over our heads — a not so gentle reminder that thunderstorms come in all sizes, and none come with a guarantee.

Here’s a Google Earth image and Google Earth KMZ file of the loop, including the side trip to the summit of Mt. Waterman.