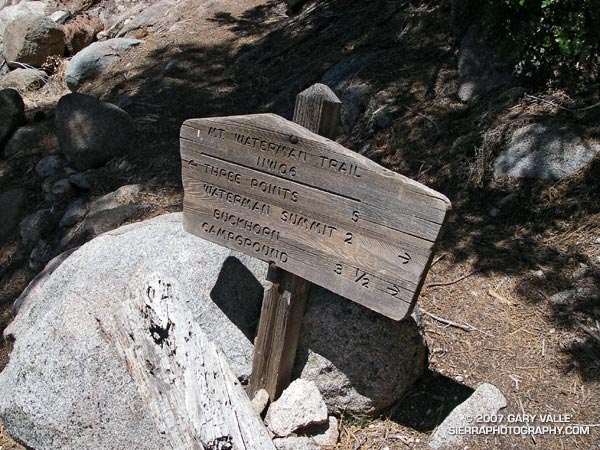 Five miles of (mostly) downhill to go. Running through an old growth forest of Jeffrey Pine, Sugar Pine and Incense Cedar, I relished being on a pine needle covered trail at 7000 ft. in the San Gabriel Mountains.

In a record dry water year, I had been curious to see how the mountains were faring. Although creeks were very low and grasses dry, my impression was that groundwater resources were not quite as bad. The usual springs and seeps still muddied the trail. In 2005 the San Gabriel Mountains were deluged with rain, and in the 2006 the rainfall was nearly normal, so some carryover would be expected.

Update May 27, 2007. My impression of groundwater resources may have been overly optimistic. On a run to Mt. Baden-Powell from Islip Saddle, I stopped by Little Jimmy Spring. It was nearly as low as in late August 2002, when Los Angeles had just experienced its driest water year on record. This year will likely break the 2001-2002 record.

Even so, it was obviously much drier than normal. There were fewer wildflowers, and some young Incense Cedars looked as if they might be stressed. On the plus side, manzanita and currant were blooming in profusion, and perhaps 30-35 scarlet red stalks of snow plant were seen on the loop.

About three miles from Three Points I happened upon another Jeffrey Pine that had been struck by lightning. This strike appeared to more energetic than the bolt that struck the tree on the Baldy North Backbone Trail. The spiral scar was wider and braided at some points, and the strike ignited the tree. Where the Baldy tree was on a sharp ridge crest, this tree was several hundred feet below the main crest in an area where the trail started to work around a projecting ridge.

More about this loop and a Google Earth image of the course can be found in the post Manzanita Morning.