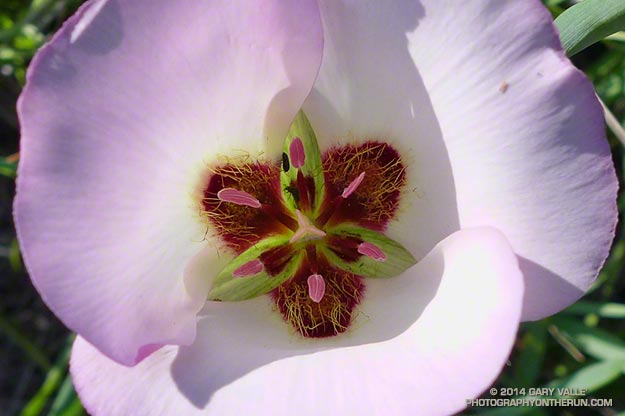 For most of the Winter it looked like there would be very few wildflowers this Spring in the Santa Monica Mountains. The drought had taken its toll, and many chaparral plants were in survival mode. Most were desiccated, some were diseased and a few were dying. Winter-bloomers such as wishbone bush, prickly phlox, shooting star, big berry manzanita and big pod Ceanothus were practically nonexistent.

Then it rained. From February 26 to March 2 many areas of Southern California recorded more than four inches of rain. Los Angeles had the most rain over five days since 2010. Although the rain didn’t end the drought, it did end one of the driest periods in 100 years, and brought crucial relief to the plants and animals.

The response to the rain was virtually immediate and has continued throughout the Spring. The rain resuscitated the vegetation and wildlife and revived habitats. Now, when you run, hike or ride a trail in the Santa Monica Mountains, if you don’t look too closely, the growth and flowering of plants in the chaparral appears to be almost normal.

Rainfall in the area has been only about 40% of normal, but in a few cases plants have responded as if the rain season had been much wetter. Plants fill more than geographical niches in an ecosystem. They fill sub-seasonal niches of rainfall, temperature, sunlight and other parameters. If rainfall occurs at an optimum time or in an optimum pattern for a plant, its benefits can be amplified. The large number of Catalina mariposa lily and wild hyacinth blooming this Spring demonstrate this effect. The growth of non-native black mustard is also more robust and widespread than might have been expected.

Here’s a slideshow of some of the wildflowers currently blooming in the Topanga State Park area of the Santa Monica Mountains. All of the photographs are from this morning’s 12-something mile loop to Trippet Ranch from the “end of Reseda” at Marvin Braude Mulholland Gateway Park.

Some related posts: Garapito Trail Runs, The Heavenly Ranch in the Hills