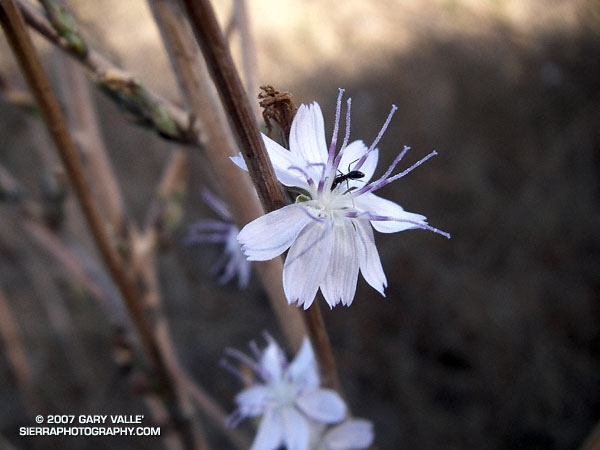 An ant forages among the florets of a wreath plant.

I’ve run past wreath plants thousands of times in the chaparral of local open space areas. At a glance, the nondescript wiry brown plant isn’t very appealing. But it’s one of a few plants you’ll see blooming in the chaparral in the Fall, so on a run this last November I took a closer look. This revealed a lavender-tinged composite flower that is anything but mundane. And, as I was to discover, a case of probable mistaken identity, and an example of one of the ways new species occur.

Three field guides in my library identify the plant pictured above as Twiggy Wreath Plant (Stephanomeria virgata). But, as discussed by Tom Chester, there is some confusion regarding it’s characteristics and identity. It could be the case that many Southern California plants previously identified as S. virgata may actually be San Diego Wreath Plant (S. diegensis), including those in the Santa Monica Mountains.

The plants are very similar, but according to the identification key for the genus Stephanomeria in the Jepson Manual can be distinguished by a groove along the length of a seed (achene). This isn’t something easily done in the field. The achenes are so tiny that they are best seen in a strong loupe or a low power microscope. Wayne’s World Volume 9 (Number 3) Fall 2000 has some photographs of the achenes and groove.

So why are S. virgata and S. diegensis so similar? The genetic relationship of various members of the genus Stephanomeria has been researched and it appears likely that S. diegensis is a relatively recent species that resulted from a natural cross of S. exigua and S. virgata.

The photograph of the foraging ant was taken on a run at Sage Ranch on November 5, 2006. Based on examination of some achenes from wreath plants in the area, the plant is probably Stephanomeria diegensis.