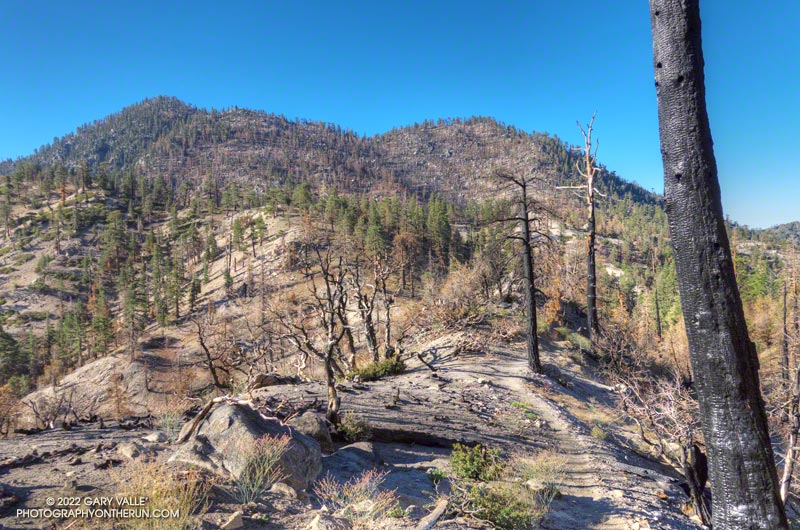 Seeing Twin Peaks while doing the Three Points Loop a couple of weeks ago reminded me that I hadn’t done Twin Peaks in quite a while. The last time had been in 2012, when I did a spur of the moment exploration down the southeast ridge of Twin Peaks, toward Triplet Rocks.

As long as I was in the neighborhood, I also wanted to do the short side trip to Mt. Waterman’s summit and see how it fared in the Bobcat Fire. (I’d skipped that side trip on the most recent Three Points Loop run.)

My general impression of Bobcat Fire impacts in the Mt. Waterman – Twin Peaks area is of varying severity. In some areas nearly all the trees were killed, while in other the trees are virtually untouched. Perhaps the most common scenario is a mix of burned, partially burned, and unburned trees.

Here is an interactive, 3D terrain version of the Bobcat Fire Soil Burn Severity Map that is zoomed in on Mt. Waterman – Twin Peaks area. The map can be zoomed, tilted, rotated, and panned. To change the view, use the control on the upper right side of the screen.

Overall, I was surprised to find that there were so few fallen trees on the Twin Peaks Trail. I think I had to step over one log, go around another, and a couple others had been cleared from the trail. The most serious obstacle was some Poodle-dog bush completely blocking the trail. Poodle-dog bush causes dermatitis in many people.

There was little damage from the heavy December storms. The elevation ranges from about 6540′ at the low point of the Twin Peaks Trail, up to 7761′ on Twin Peaks East, so much of the precipitation must have fallen as snow.

A couple of trees were burned on the perimeter of Twin Peaks East’s flat summit, but the tops of both Twin Peaks East and Mt. Waterman were pleasant places to be.