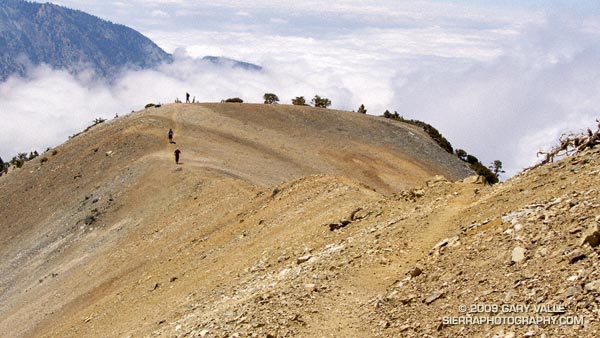 One, two, ten…
Will the switchbacks ever end?

I can’t think of a tougher stretch of trail in the San Gabriel Mountains. From Mt. Baldy Village, the Bear Canyon/Old Mt. Baldy Trail climbs 5800′ in 6.7 miles to the 10,064′ summit of Mt. Baldy (Mt. San Antonio). The route is as rewarding as it is difficult, with inspiring views and interesting terrain.

I had hoped for some remnant clouds from Friday’s storms, but didn’t expect to be using my windshield wipers driving to the trailhead. The dark gray clouds piled against the mountains had a scuddy, stormy look, and I had a difficult time convincing myself that it was just a deep marine layer. But the sun was shining when I parked at the bottom of Bear Canyon Rd. and began to walk up the steep, cabin-lined street.

The last time I had been on the trail was July 2004, during the Baldy Peaks 50K. That day we started at the parking lot at Icehouse Canyon, and over the course of the race climbed Mt. Baldy twice. The first time from the Village, and the second time from Manker Flats. Today I wasn’t in a race, and would be completely satisfied to climb Mt. Baldy just once.

Running up a moderate section of trail below Bear Flat, I tried to figure out the last time I had run down the Bear Canyon Trail. Sometime before the Baldy Peaks race. I wasn’t sure how long it had been, but long enough to forget how grueling steep downhill can be.

My thoughts are interrupted by a pair of hikers coming down the trail. I ask how they’re doing, and am surprised to hear, “not so good.” They look disappointed and tired, and anxious to get down to the car. I wonder if one of them is ill, or if they just underestimated the difficulty of the trail.

A half-mile later I’m crossing the creek at Bear Flat (~5500′). This is where the fun begins. Here the trail switchbacks up a steep east-southeast facing chaparral slope to Mt. Baldy’s South Ridge, gaining about 1500′ in one mile. On a warm day it can be hellish. On a cool day it isn’t easy. Today it is cool. The cloud layer has continued to crawl up the mountain, and it envelops me as I start up the switchbacks.

A little more than a year ago, these slopes were burned in the 2008 Bighorn Fire. I had expected to see black, burned and barren chaparral in the initial stage of recovery, but instead there is substantial growth, comparable to 2-3 years of recovery in chaparral at a lower elevation.

At an elevation of about 7000′, I climb out of the clouds and into the sun. What a day! Benign clouds lap at the mountainside, enhancing already dramatic views. Between 7000′ and 9000′, I encounter several hikers and briefly chat with one veteran hiker, who tells me this is his friend’s intro to hiking! It is a busy day for this trail, and I’m guessing I’ll see more hikers when I descend.

Above 9000′ the open forest of Jeffrey, Sugar and Lodgepole pine becomes more sparse and stunted. The route feels more alpine and climbs onto the rocky crest of an exposed ridge (HD Video Snapshot). A little higher, a large patch of snow accentuates the “you’re getting near tree line” feeling.

Approaching Baldy’s summit, I’m surprised to see a wispy cloud had also ascended the peak and is waiting for me to catch up. On top there seems to be a mix of young and old, veterans and first-timers, excitement and exhaustion. After a few minutes on the summit, I run over to West Baldy. Then it is gravity’s turn, and I take the first steps down the slope.

The descent is just as extraordinary as the ascent, with far-reaching mountain views over a sea of clouds. On an exposed section of the ridge at about the 8500′ I happen on a Sugar pine with a spiral scar from a lightning strike. Such trees are disturbingly common. There is a Jeffrey pine at about the same elevation on Mt. Baldy’s North Backbone Trail with a similar lightning scar.

At around 7500′, I descend into the clouds. The change from blue to gray does not carry with it the usual malaise. Wisps of warm cloud thread softly through the pines and a solitary deer walks silently through the dream-like scene (HD Video Snapshot).

One, two, ten… Will the switchbacks ever end? Finally, through the trees I see the brilliant green of the ferns at Bear Flat. Running becomes easier. I pick up the pace, and in a few minutes turn onto the asphalt of Bear Canyon road.

Here’s a Cesium browser View of a GPS trace of my route.