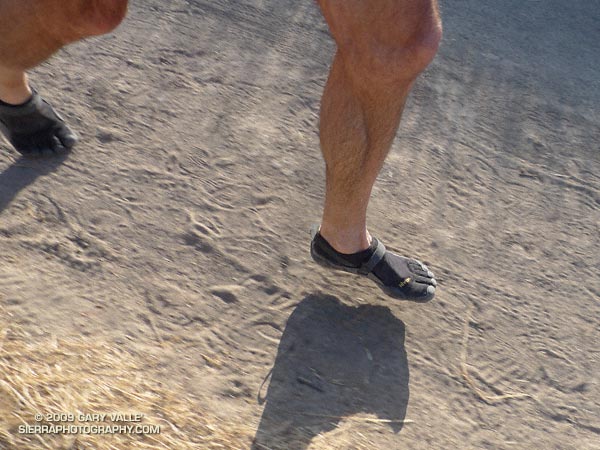 At one time or another, most of us have run barefoot — on a beach or in a park, or certainly somewhere as a child.

As a result of the insight and enthusiasm of Barefoot Ted McDonald, and the publication of Christopher McDougall’s book Born to Run, runners have been swept into a new era of minimalist running using Vibram FiveFingers (VFFs). Now a runner can, with VFFs and a little care, run trails virtually barefoot.

Recently, while in Kernville, California, I stopped by Sierra South Paddlesports and picked up a pair of Vibram FiveFingers KSOs. After kayaking in the VFFs a couple of days, the next step was to try them on a short weekday run. One of my usual weekday running sites, Ahmanson Ranch, seemed like a good place to start.

The course I’d picked for the run was mainly on dirt road, but also included some single track. Trail surfaces were a mix of sun-baked dirt and sand, with a couple of short rocky sections. There was one moderate climb with an elevation gain of about 250 ft. The plan was to take a regular pair of running shoes in a pack, and switch shoes at the first sign of a problem.

From talking to other runners and reading about their experiences, I had some idea of what to expect, but was still a little apprehensive. One very common comment was to “not overdo it.” As enamored as I was about running in VFFs, running shoes have worked well for me for 35+ years. It would be really stupid to suffer my first debilitating injury (other than a few rolled ankles) running in the VFFs!

I had given a lot of thought to how I was going to run in the VFFs. My conclusion was not to dramatically change my running technique, but to refine it. Having rock climbed for many years, my goal was to use my legs and feet as appendages, rather than pogo sticks, gently meeting the ground on each stride with precision and “feel.”

It worked! Although I was prepared to switch to regular shoes, much to my surprise, it wasn’t necessary. Running in the VFFs was different, but not the bizarro experience I had imagined. There were even moments when I was just running, and did not have to concentrate on technique and footfalls. At the end of the run I felt good  — no blisters, no bone bruises, no other problems.

After dinner I noticed a different pattern of fatigue in my legs, and my feet felt a little warm and tingly, but there was no soreness or pain. The following day I ran a tough 8 mile course on the Backbone Trail (in regular shoes) and didn’t feel any unusual tweaks or twinges.

Echoing the comments of other runners, I think the key is to not overdo it. Running barefoot used to require a buildup of toughness, strength and skill. Some say the VFFs shortcut that process, and injuries are more likely. Keeping that in mind, I’ll probably run in the VFFs every week or two, and slowly build skill and strength.

Or not… It was hard to curb my enthusiasm, and I used the VFFs on four consecutive weekday runs. Two of the runs were at Ahamnson Ranch, a great area for the VFF newbie, but the other two were on more technical and less forgiving trails. By the fourth day my calves were wasted. This made it difficult to run with good VFF technique — particularly on rocky downhills. The result was a slight bone bruise on my left heel.

Update 08/11/13. Research suggests caution when transitioning to minimalist shoes. See Barefoot Running Can Cause Injuries, Too (The New York Times) and comments.

Update 02/10/10. I’ve been running in VFFs about once a week for several months now, and really enjoy running in them. Not only is it fun, I think running in the VFFs is refining my running technique so that it is lower impact. Now there’s research that suggests this may be the case. For a comprehensible look at the science of running barefoot, and in VFFs, see Biomechanics of Foot Strikes & Applications to Running Barefoot or in Minimal Footwear.