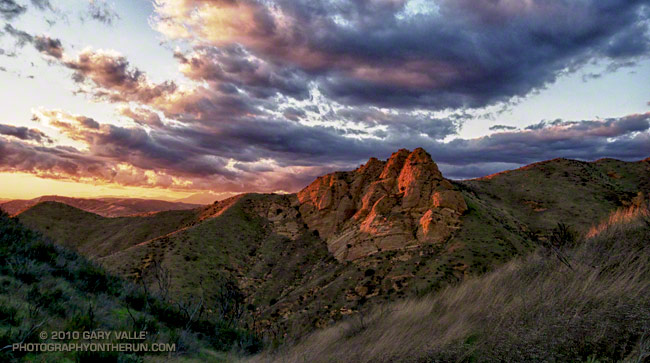 The temperature was in the low fifties, but with a 20 mph wind it was cold. I had just run up the Chumash trail, and was on my way down. The sun was nearing the horizon and hidden by a band of clouds. It had been like that since I topped out at Rocky Peak road. I hoped by the time I reached a vantage point of Chumash Rocks the setting sun would break underneath the clouds and illuminate the formation.

Nope. When I reached the viewpoint, the rocks were still in shadow. And the wind was even stronger. Squeezed between two hills, it rushed through the little col in cold, turbulent gusts. Buffeted by the wind, and chilled to the bone, I waited for the sun.

And waited. It was too cold to just stand there. I took a few photos, but the sun and clouds were not cooperating. At some point, minutes away, the sun would set, and that would be that. The photo just wasn’t going to happen. I returned to the trail and began to run down the hill.

In the lee of the hills the wind lessened, and it was not so cold. It was still a few minutes before sunset, and as I rounded a corner I could see a bright glow at the edge of the clouds.

I was several hundred yards down the trail when the first hint of sunlight appeared on a distant hill. It was veiled and muted, but it was sun. Maybe there was time. I turned and hurried back up the trail.