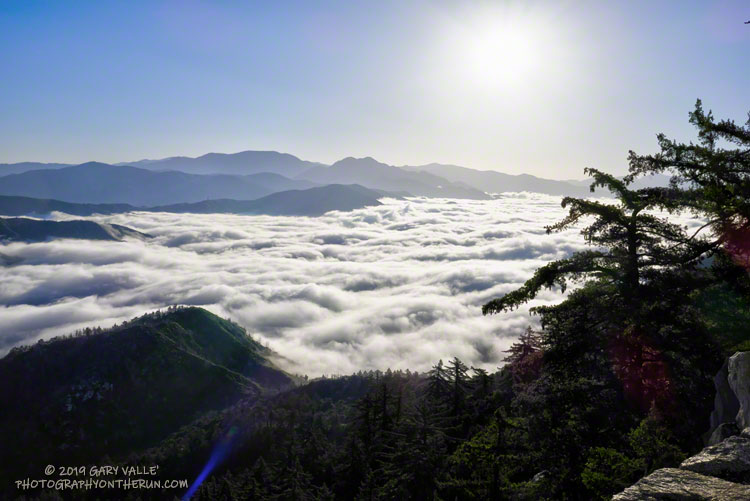 Was back on Mt. Wilson this morning, enjoying the mountains, and getting in a little more training for the upcoming Angeles National Forest Trail Run races.

There were already two cars parked in the loop road turnout when I got there, and another car pulled in behind me. All were runners.

The turnout is near the start of the ANFTR course and most of the runners were planning to do the ANFTR 25K loop or a variation. One runner — training for the ANFTR 60K and AC100 — was doing the 50K course.

The extensive layer of low clouds in the canyons of the West Fork and East Fork San Gabriel River at the start of the run was indicative of a cool onshore flow. Too cool and comfortable, really. Anticipating warmer temperatures for the ANFTR race, I wore an extra layer for the run, and probably should have worn more.

The last two years the ANFTR races have been run during record-setting heatwaves. We’ve had a lot of cool weather this year and for a while it looked like the pleasant weather might carry over to race day, July 6. But following the finest of ANFTR/Mt. Disappointment traditions, it now looks like temps will probably be warming up for the race. Maybe not quite as hot as the last two years, but still on the toasty side. We’ll see!

Update Monday, July 1, 2019. Last week the GFS weather model was forecasting temps on race day to be near 100 at the lower elevations and over 90 on Mt. Wilson. This morning’s GFS max temperature forecasts are down about 10 degrees from that. Basically highs in the low 90s (in the shade) for the lower elevations and around 80 at Mt. Wilson. Temps in the sun, especially on exposed sun-facing slopes, could still top 100. If the forecast holds, the temperatures today should be similar to those on race day. We’ll see! Here are links to the Clear Creek RAWS and Mt. Wilson RAWS.