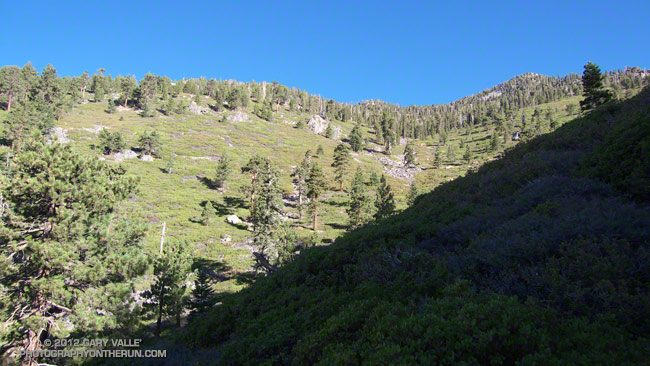 “What’s the elevation gain?” is a common question when talking about a trail run, because it makes such a huge difference in the difficulty of the run. A long-standing rule of thumb, Naismith’s Rule, says that the additional time required to gain 1000 ft. of elevation on a run/hike, will be the same as the time to run/hike 8000 ft. (1.5 miles) on the flat. An analysis of fell running records supports this 1 to 8 ratio.

This is not news to anyone who runs or hikes hilly trails. The first thing I check when evaluating a new race or run is the elevation gain. All the technology we have for recording and analyzing trail runs is remarkable, but it can sometimes result in wildly inaccurate claims about the elevation gain of a course. 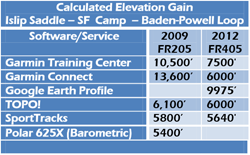 The table to the left lists the elevation gain calculated by various software and services for the the same course using GPS tracks from a Garmin Forerunner 205 and Forerunner 405. The course is the Islip Saddle – SF Campground – Mt. Baden-Powell loop in the San Gabriel Mountains.  SportTracks elevations were corrected using pkan’s Elevation Correction Plugin and SRTM elevations data in 2009 and NED 1/3 arc second DEMs in 2012. SportTracks elevation data smoothing was set to 55.

Calculations of elevation gain have improved since 2009. One reason is newer GPS chips generally produce higher quality tracks. Another is the methods used to calculate elevation gain/loss have improved and more accurate elevation datasets have become readily available and integrated into software such as SportTracks and services such as Garmin Connect.

So which of these elevation gains is the closest to reality? Fortunately, it’s fairly easy to do a low tech sanity check of these high tech results. All that is required is to get out an USGS topo map — either electronically or on paper — and do a little arithmetic.

Let’s see. From South Fork Campground (4560′) to the summit of Mt. Baden-Powell (9399′) is about 4839′. But there are a couple of small descents on the way up so we add another 240′ giving a total to the top of Mt. Baden-Powell of 5079′. It’s mostly downhill from Baden-Powell to Islip Saddle, but there are a couple of hills. The main one is a 370′ climb on the PCT up and over the shoulder of Throop Peak. There’s also another 100′ climb near Mt. Burnham, and if you stop at Little Jimmy Spring another 60′ climb. This gives a total of 5609′. Adding in a fudge factor of 100′ for very small climbs that were not included in the total and the result is a reality-checked elevation gain of about 5700′. Comparing this total to the computed elevation gains in the table, the actual gain might be as much as 6000′, but it’s not likely to be 7500′. And there’s just no way the gain is 9975′!

The title photograph is from the Momyer Trail on San Gorgonio Mountain.