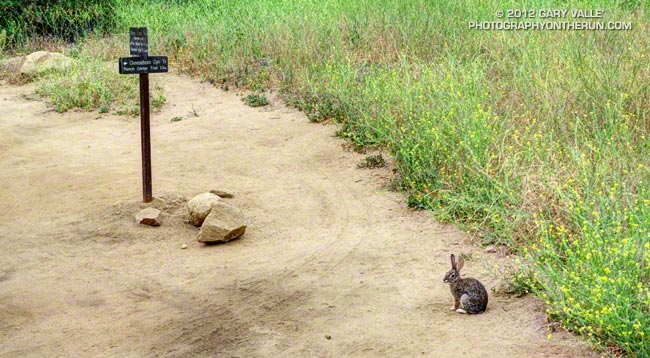 I don’t think I’ve ever seen as many rabbits on a run. It seemed that every few strides another rabbit, or two or three rabbits, would pop up on the trail.

Cottontails have a peculiar behavior when people approach. When one sees me running toward it, it will often watch and wait…, watch and wait… It’s almost like the rabbit is waiting to see just how close I’ll approach. Usually when I’m about 10-12 feet away — sometimes closer — it will break for an established escape path. Then just a foot or two into the brush, it will stop again. If you stop and stand very still, many times a rabbit “on pause” will just sit there, 3 to 4 feet away.

Rabbits aren’t always so calm. One time I was running down Las Virgenes Canyon and a ground squirrel and rabbit were on the road about 25 yards ahead of me. They must have been preoccupied with each other because when the squirrel finally noticed me, it panicked and bolted toward the rabbit. That caused the rabbit to freak. The rabbit launched like a rocket, just as the squirrel collided with it. The resulting visual was of a rabbit eight feet in the air with a ground squirrel spinning off-kilter below it!