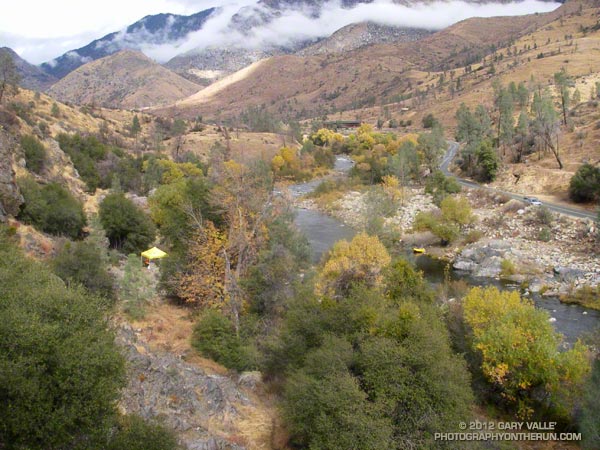 Was that rain I heard outside of the motel? Bleary-eyed, I grabbed my phone and checked the current weather radar. If it wasn’t raining, it would be soon. The radar showed an elongated patchwork of lime green blotches, sprinkled with yellow, approaching the blue dot marking the room in Kernville, California.

It looked like the front was going to pass through a bit earlier than forecast — right about the time we would be starting the 50K. The good news was there didn’t appear to be a lot of shower activity behind the front. Whether that would be the case in the middle of the day remained to be seen.

The annual Run-4-A-Way Burger Run follows the 14.5 mile Whiskey Flat Trail from the Burlando Trailhead in Kernville up the Kern River to Johnny McNally’s Fairview Lodge and Restaurant. This year R.D. Mike Lane had added a 50K. That’s what I was running. The “Double Burger” would do the trail both ways — from McNally’s down to Kernville and then back again.

It was rainy, dark and gloomy as we drove up Mountain 99 toward McNally’s. I like the rain as much as anyone in Southern California, but hoped the radar was right, and we wouldn’t have to deal with wet weather for the next several hours. I reminded myself that when the weather looks wet and rainy it’s (almost) always better on the trail than it looks like from the car.

Up at McNally’s Donni and Neil got us signed in, handed out the bib numbers and T-shirts, and got us started at 7:01. There were just a few of us running the 50K and the faster runners were soon out of sight. They would make it down to Burlando in less than 2.5 hours. 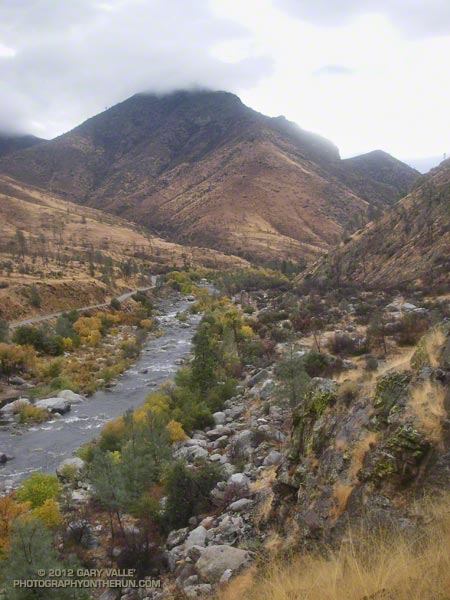 Whatever your pace, the running was spectacular! The light rain turned to showers after the first few miles. On the higher mountains snow could be seen along the margins of the clouds.  From time to time the sun would break through the clouds, illuminating the valley. At one point showers and sun mixed in dazzling display.

The Whiskey Flat Trail was in great shape. According to Stewards of the Sequoia Executive Director Chris Hogan, volunteers worked 500 hours to restore the trail — clearing brush, improving the tread, removing down trees, and installing water bars to control erosion. Their hard work, and the work of other volunteer trail maintenance groups, keeps our trails open and enjoyable.

Although I wasn’t particularly speedy, the run went well for me. I ran the race in Hoka One One Mafate 2s. The Mafate 2s are way different from the shoes I’ve been using in ultras. The Double Burger 50K is 100% single track and the shoes handled it well. Whether it was the shoes, the weather, my pace, or whatever I don’t know; but my legs and feet felt better (and I felt better) over the last several miles of the course than in any 50K I’ve done the past few years.

Many thanks to Mike Lane, Donni & Neil Higgins, John Seals & Lisa Ross, McNally’s, all the volunteers, and all of the hikers & runners for a great event! Here’s an interactive Cesium browser View of the Burger Run course and an elevation profile generated in SportTracks.

Here are a few additional photos from the run. Click for a larger image: