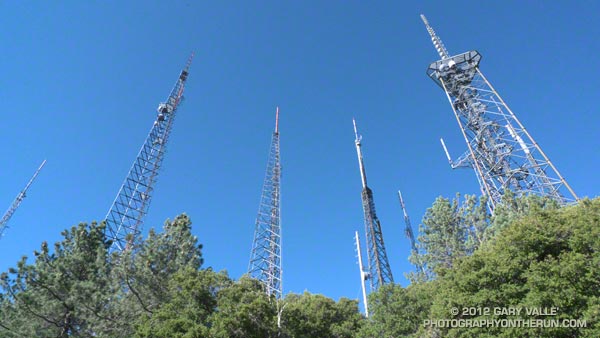 The gate to Skyline Park on Mt. Wilson doesn’t normally open until 10:00 a.m., so for Saturday’s run we parked in a large turnout along the loop road downhill from the gate. A trailhead that accesses the Kenyon Devore Trail is just downhill from the turnout, and a few yards down the trail is the lateral trail to Skyline Park. The Rim Trail trailhead is in Skyline Park along the service road that leads to the observatory grounds. This Observatory Pamphlet (PDF) includes a map that shows its location.

So we’re about to start the run, and I’m going through the routine of last minute checks. Everything looks good so I lock the car and — nothing happens. Where’s the familiar single beep? I try again… Nothing.

Ah technology! It doesn’t take long to figure out that those giant transmitters towering above me are jamming my smart key. OK, I want to get running, but I also want to be sure I’m going to able to start the car when we get back. Fortunately, the key system has an emergency mechanical key to get in the car, and then there’s a procedure to enable the car to detect the smart key. The procedure works, and after (mechanically) locking the car we’re off and running.

The pattern of RF energy emitted near an antenna is complex and I imagine it is particularly so in the middle a large antenna farm such as on Mt. Wilson.

I’ve parked in Skyline Park several times without having a smart key problem; however a few years ago I did have a problem with a GPS watch getting a lock on satellites at the start of a Mt. Disappointment race. That hasn’t happended with my current Garmin watch, which has much better satellite acquisition and sensitivity.

I guess whatever lobe of RF was interfering with the key changed shape or position, because when we got back to the car at the end of the run the smart key worked fine!