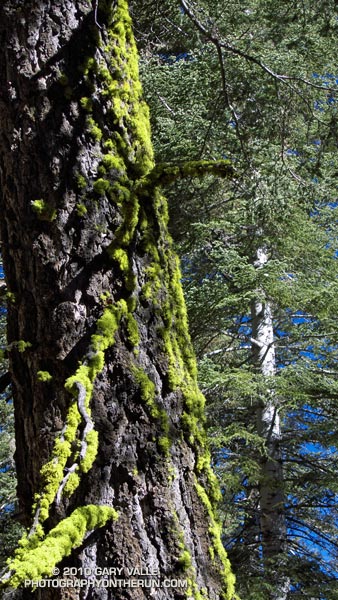 The vibrance of the green caught my eye. Flourishing as a result of a May’s unusually cool, damp, and cloudy weather, the wolf lichen on this White Fir seemed to glow in the morning sun. I was on the Vincent Tumamait Trail, in a dense forest of White Fir and Jeffrey Pine.

The weather at 8500 ft. was idyllic, but here – as elsewhere in the mountains – Spring had been slow to arrive. Scattered patches of snow remained on the forest floor, and the smell of damp soil, warm pine needles, and broken fir limbs filled the air. Exposed by melting snow, the Winter workings of voles wound snake-like across the ground, and I wondered how many mountain canyons had started with the erosion of a vole’s Winter run.

Given its bright chartreuse green color, it isn’t surprising that this lichen (Letharia vulpina) has been used by various indigenous groups to make a dye. Perhaps more of a curiosity is that it is toxic, and has reportedly been used as a poison, and medicinal remedy.

From Sunday’s trail run in the Chumash Wilderness.