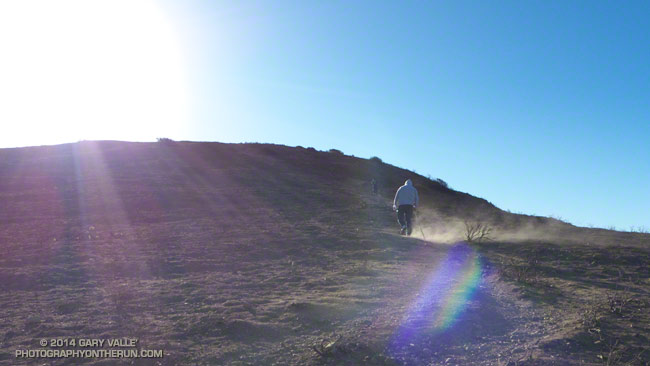 Offshore wind events have been frequent this rain season. They often follow “inside slider” systems that miss Southern California and take a more inland track over the West. The result is more wind and less rain.

Los Angeles wrapped up calendar year 2013 with the least amount of rainfall on record. When talking about rainfall in Southern California it is more common to refer to the “rain year” which runs from July 1 to June 30.  (The water year was changed to October 1 to September 30,)

So when was the driest water year in Los Angeles? It was just a few years ago, in 2006-2007 when only 3.21 inches of rain was recorded. There were also many wind events in that dry rain season, and like this January not a lot of green in the hills. To date we have had less rainfall this water year than in 2006-2007!

For the most part this Fall and Winter I’ve been able to work around the wind events and do runs that more or less escaped the wind. I thought that was going to be the case again today. The predicted offshore event seemed to be behind schedule and when I left for the Wendy Drive trailhead there wasn’t much wind.

There were stirrings of an offshore breeze at the trailhead and I commented to a hiker that I hoped the winds would hold off until later in the day. The plan was to do the out and back run from Wendy Drive to Mugu Peak. Because of the myriad of route choices, this is a fun run to do as a time challenge. What is the fastest route? Try it and see.

Things looked good all the way down Sycamore Canyon and into La Jolla Valley, but the wind started to pick up as I worked toward Mugu Peak.

Once on the peak it was like flipping a switch on a wind tunnel! I was ahead of my PR to the peak by several minutes and I was trying to push the pace. That was not happening and several times I had to pause and put a hand down as I staggered in the middle of a big step.

I caught up to a couple of people just before the final steep push to the summit. The wind flow was not as turbulent and gusty here and one of them started to run. With each stride the dust streaked from his shoes and I stopped to take some photos and this HD video snapshot.  The smoother winds didn’t last for long, and neither did the running.

Mugu Peak’s next door neighbor to the west, Laguna Peak, has recorded a wind gust of 125 mph. In this photo from Boney Mountain Mugu Peak is on the far left and Laguna Peak has the communications equipment on the summit. Today I’d estimate the strongest gusts on Mugu Peak were in the range of 50-60 mph. The winds were strong enough that the sewn end of a fluttering strap was like a whip and just as capable of raising a welt.

I spent zero time on the summit and was very happy to get back down to La Jolla Valley.