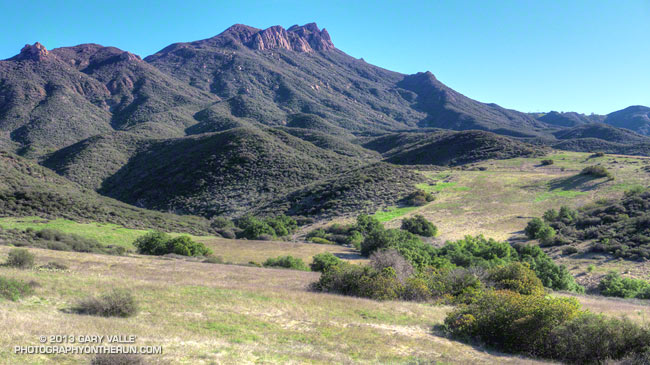 Today’s plan was to get in around 25 miles, and like last Saturday, I was trying to keep the elevation gain down to something reasonable. I’ve been doing longer weekday runs, longer weekend runs and more days with runs. If I increased the elevation gain by the same percentage as the mileage I didn’t think I would be able to keep up with the extra training.

Today’s long run had started with a low impact 8.5 miles from Wendy Drive & Potrero road down Sycamore Canyon to the beach. That had gone well. I’d hooked up with a group training for the L.A. Marathon, and they had set a comfortable — but steady — pace.

Sycamore Canyon Campground was just beginning to stir as I ran down the access road. Warm sunlight was finding its way into the camp and other than the camp host, not many people were out and about.  Overhead a raucous gang of crows jeered a passing band of parrots, and across PCH a wave crashed on the rocky shore.

I continued running through the campground to the day use parking lot and then down onto the sand at the PCH bridge. The tide was high and from time to time whitewater from a larger wave would rush up the sand slope under the bridge and spill over the berm. I thought of bare feet on cold Rincon sand and how 55 deg water would at first feel warm on a Winter day.

With Part A of my run complete, I started thinking about Part B. If I was going to reach my mileage goal I needed to extend the return route by about 7 miles. To keep the elevation gain to a minimum, I came up with the contrived idea of doing out & backs up Serrano Canyon and Wood Canyon on the way back up Sycamore. It didn’t sound very appealing, but would add the necessary miles. Leaving the sand and seagulls behind, I started the long haul back up the canyon.

It wasn’t as cold in Sycamore Canyon as last Saturday, but with the down-canyon breeze it was still chilly in the shade. In about 15 minutes I reached the Serrano Canyon Trail and turned east up the canyon. The initial part of the canyon was quite flat and I resigned myself to the idea of running part way up the classic canyon and turning around just before reaching one of the most scenic spots in the Santa Monica Mountains.

At the landslide a half-mile into the canyon the trail steepens briefly and climbs above the creek. Just before starting up the hill I stopped to take a photo of the slide. Looking closer at one of the large boulders, I noticed it contained shell impressions and remnants similar to those found on the Fossil Trail. After snapping a photo I continued up the canyon.

Much of Serrano Canyon was in shade on this Winter morning; but in places the sun would find its way through the twists and turns of the canyon, warming me as only the morning sun can do on a cold day. With almost no water in the creek the 15 or so creek crossings in the canyon were just dips in the trail and the running was free, easy and enjoyable.

I passed the two mile turnaround point with little thought of plans, miles, races or elevation gain, and soon found myself standing on the edge of Serrano Valley’s spectacular grasslands. Rock formations on the southern flank of Boney Mountain towered above the valley and a green undercoat of Winter growth accented the trails and terrain. With a deep sigh I continued running into the Boney Mountain wilderness.

This route bypassed Sycamore Canyon road almost entirely and avoided the toil of having to run back up the road after just running down it. One minor issue was that when I got back to Satwiwa, I’d only run 21 miles. That was remedied by running over to Ranch Overlook and back.