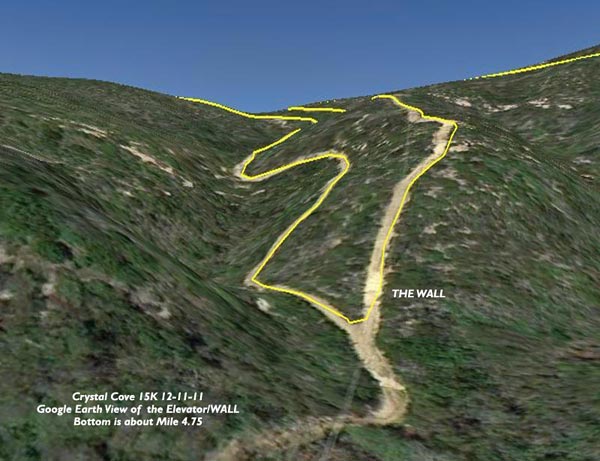 The post on the XTERRA web site said the new Crystal Cove 15K course had been approved, and also mentioned something about a “gnarly” hill. I thought I better check it out, and followed a link to the course info on MapMyRun.

The elevation profile didn’t look too bad. It had the usual ups and downs you expect to see on a Southern California trail run. In Tour de France fashion, MapMyRun categorizes the more difficult climbs on a course from Cat 5 to Cat 1 with Cat 1 being more difficult.  Climbs that are crazy difficult are rated Hors catégorie (HC). A climb has to be at least 0.3 mile long to be categorized.

Two categorized climbs were noted on the MapMyRun elevation profile of the Crystal Cove 15K course: a Cat 3 that began about a half-mile into the race and climbed about 775′ over 3.4 miles, and a Cat 5 that started at about mile 4.7 and gained about 130′. The gnarly climb was supposed to be somewhere around mile 5, but the MapMyRun profile indicated that section had a grade of 2.6%??

The gnarly hill was waiting for us around a sharp corner at mile 4.75. Locals refer to it as the Elevator, but the runners I talked to call it THE WALL. Since you ride an Elevator, but have to crawl up and over a wall I’m going with THE WALL. Whatever you call the thing, it was the steepest pitch I’ve ever encountered on a race course, and steep enough that hikers often descend it on their backside. (It’s steeper than it looks in the video!)

And once you’ve clawed your way over THE WALL you’re not done — the hill continues another 0.4 mile and averages about a 15% grade. I pushed on up the climb, propelled by the thought that the MapMyRun profile showed it was nearly all downhill from around mile 5.7 to the Finish — I would have almost four miles of downhill bliss.

Or not! It was in the middle of the uphill around mile seven that I was beginning to wonder when the “good” downhill was going to begin. It had to start soon; the course was only about 9.5 miles long! After struggling to keep my pace up through a long stretch of level terrain around mile eight, I wondered — probably out loud — if the course was going to fall off the edge of the earth.

From madness comes revelation, and in this case the edge of the world. The last mile-plus of the course plummeted nearly 700 quad-numbing feet to the Finish.

Reality check: Here’s a higher resolution elevation profile generated in SportTracks using my GPS track from this year’s race. You can see there was a lot more to the course than shown in the MapMyRun profile. There are several tough climbs, ranging in grade from about 5% to 15%, and the last big hill was definitely gnarly! The course was great, and much more interesting than the MapMyRun profile suggested.