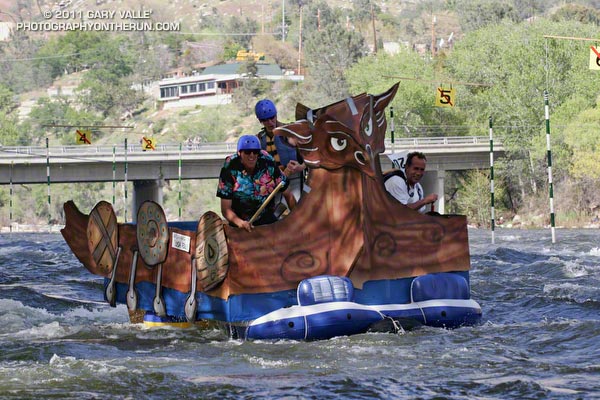 Saturday, racers had great water for paddling the spectacular waterfalls, steep drops, and slides on Brush Creek; and Saturday afternoon at Riverside Park there was good coverage and splashy rapids for the second edition of the Hooligan Boat competition. Once again, the Hooligan boats were a spectator favorite. 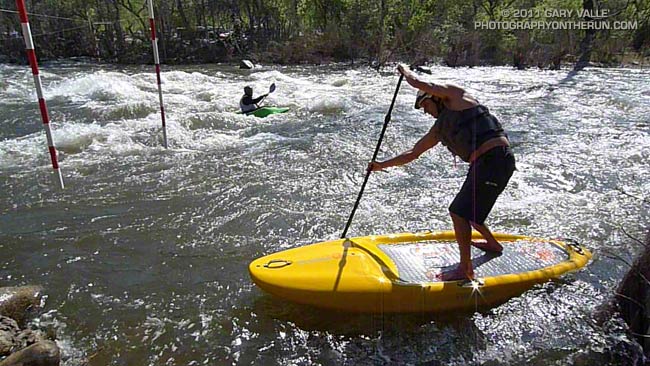 Saturday night the Kern River flow increased from about 2250 cfs to 2800 cfs, and Sunday morning racers competing in the Tom Johnson Whitewater Slalom had the most water for the slalom in over 20 years. This resulted in some challenging moves on the fast moving river, and many paddlers had to go to “plan B” after getting pushed off line, coming in low on a gate, or blowing a ferry.

Speaking of hard moves, here’s an HD video snapshot of innovative kayak, surfboard and SUP designer Corran Addison (sans Mohawk) doing the difficult cross river move from gate #11 to gate #12, and then down through gates #13 and #14 on a SUP.

The 2012 Kern River Festival will be April 20-22 in Kernville, California.