Remember that shiny, new bridge on the Crags Road Trail that made it easy to cross Malibu Creek? Well, it’s gone, gone, gone — washed away by high flows on January 9, 2023. State Parks has built and rebuilt several bridges here. All that remains is a massive block of concrete used as a foundation.

I was just a couple of miles into an extended version of the Bulldog Loop. The temperature was in the mid-30s, and once again, I was having to cross Malibu Creek on a makeshift bridge of wobbly limbs and debris.

The flood was the result of a series of three increasingly wet storms between December 30 and January 10. During that period, the Malibu Canyon RAWS recorded about 13 inches of rain. In the last storm of the series, 6 inches of rain was recorded in about 33 hours.

The flooding along the Crags Road Trail from the Forest Trail junction to the M*A*S*H site was similar to the February 2017 and December 2021 events. In the January 2023 event, more debris was deposited on the trail, and sections of the trail were obliterated. That stretch of trail is popular, and a new use trail is already taking shape.

Rainfall and runoff were even higher in Santa Barbara and Ventura Counties. The Rose Valley RAWS recorded over 22 inches of rain for the three storms. According to preliminary streamflow data, the Ventura River Near Ventura reached a new record stage height of 25.42 feet on January 9. The Sespe Creek Near Fillmore gage malfunctioned at the peak flow but reached at least 20.38 feet. 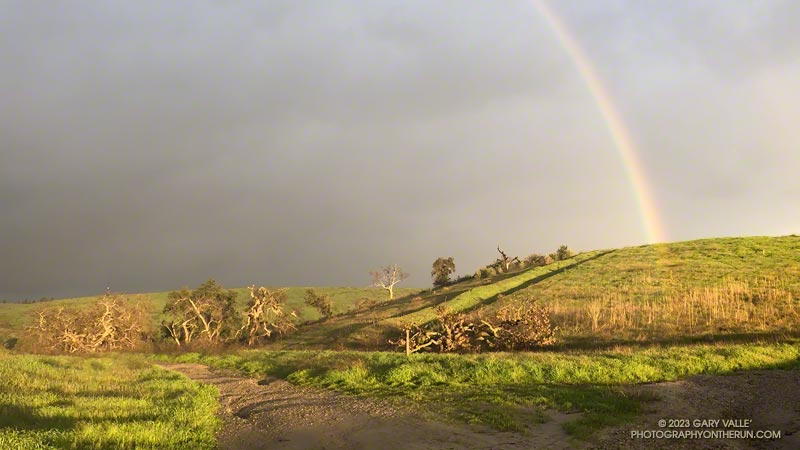 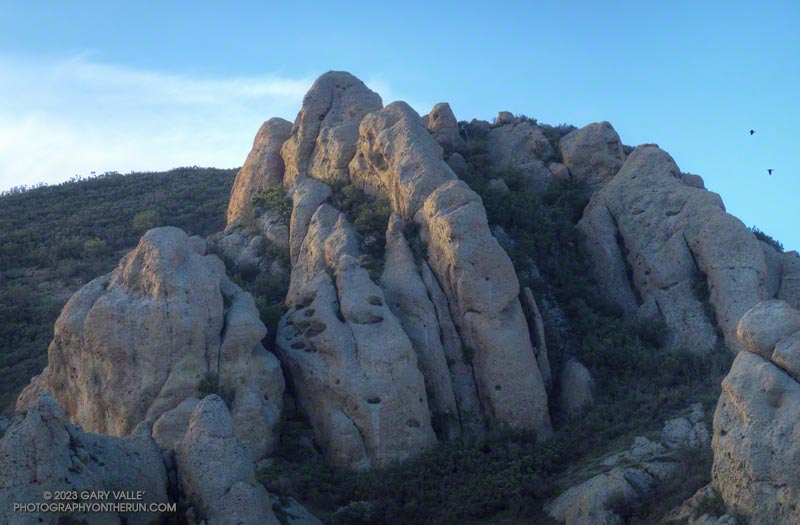 Continuing the theme of checking out local trails following the December 2022 – January 2023 series of rainstorms, this morning I did a trail run/hike from the Wendy Drive Trailhead in Newbury Park.

I was able to check out several trails — and get in a little climbing — by doing Sandstone Peak via Boney Mountain’s Western Ridge and Tri Peaks and then returning by way of the Backbone Trail, Big Sycamore Canyon, and the Upper Sycamore Trail.

The surprising headline is that the trails on this route held up better than expected. Although there was a lot of rain, the rain rates in this area must not have been excessive. Generally, it looked like streams were able to handle the runoff.

It didn’t come out of it unscathed, but the Blue Canyon segment of the Backbone Trail was less damaged than usual. Some route-finding through the cobble was required, but a new use trail was already starting to emerge. I was also surprised to see that several oft-repaired sections of the Upper Sycamore Trail were mostly intact. There was a lot of creek hopping on these trails, but it was good to hear the burble and gurgle of the rejuvenated streams.

Work done by the Santa Monica Mountains Trails Council prevented additional damage. In the past, a section of Old Boney segment of the Backbone Trail between the Chamberlain Trail junction and Blue Canyon has always had significant problems following rainstorms. Water would run down the trail, eroding ruts and exposing rocks. In one place, most of the trail had collapsed into the canyon. Thanks to the SMMTC, I ran it today without a second thought. A steep section of the Backbone Trail above Chamberlain Rock, repaired by the SMMTC, also held up well.

Speaking of which… As I was running down the Chamberlain Trail, I’d noticed some shoe tracks that were also headed down. This was a bit odd because there weren’t any tracks coming up. The puzzle was solved when I caught up to three hikers near Chamberlain Rock. They had also done the Western Ridge of Boney Mountain and were going to complete the loop via Sycamore Canyon.

Here is an interactive, 3D terrain view of a GPS track (yellow) to Sandstone Peak from Wendy Drive via Boney Mountain’s Western Ridge and Tri Peaks, then returning via Big Sycamore Canyon and the Upper Sycamore Trail. Two alternate routes are also shown (red). To change the view, use the control on the upper right side of the screen. Track and placename locations are approximate and subject to errors. Poor weather and other conditions may make this route unsuitable for this activity.

Several popular trails and fire roads in Topanga State Park have been damaged by the cumulative effects of Winter 2022-2023 rainstorms.

Since December 1, 2022, the Topanga Remote Automated Weather Station (RAWS) has recorded nearly 16 inches of rain. The most rainfall occurred January 9-10, when about 5.4 inches was measured.

On Sunday, January 15, I did an exploratory trail run from the Top of Reseda that took me through some popular areas of the Park. This included Fire Road #30, the Hub, Temescal Peak, Temescal Lookout, Temescal Ridge Fire Road, Eagle Springs Fire Road, Eagle Rock Fire Road, the Garapito Trail, and the Bent Arrow Trail.

There were numerous mudslides on the fire roads. The larger slides were on Fire Road #30 below the Hub and Temescal Ridge Fire Road between the Backbone Trail junction and Temescal Lookout. There was also significant roadbed and shoulder erosion in places. At the time, all were passable on foot.

The trails were a different matter. Unfortunately, much of the repair work done on the Bent Arrow Trail following last year’s rain was damaged or destroyed.

The Garapito Trail was blocked in two places on the upper part of the trail. One problem was from a sluff of soil and brush sliding onto the trail. The other was from the collapse of a section of trail. These were a problem. There were additional sluffs, limbs, and washouts on the trail that were passable at the time.

Update February 5, 2023.  The Bent Arrow Trail is closed. Fire Road #30, Eagle Springs Fire Road, and East Topanga Fire Road to Parker Mesa had all been cleared. The Musch Trail was eroded in spots but OK. Use of the Garapito Trail has moderated its condition. Some brush had been cleared and paths have evolved through the sections of collapsed trail. Extra care is required in some spots.

Other trails and fire roads in Topanga State Park likely had similar impacts. I would expect, like last year, sections of the Santa Ynez Trail lower in the canyon to be washed out.

La Ninas are fickle beasts, and particularly in a time of climate change, the existence of La Nina conditions in the equatorial Pacific is no guarantee of a dry rain season in Southern California.

This brings the Rain Year total precipitation for Los Angeles up to 13.38 inches — the sixth wettest for the date going back to 1877 — and 94% of the normal ANNUAL rainfall.

Depending on the exact route, the trail run totals about 7.5 miles, with about 825 feet of cumulative elevation gain. The Beast is the longest continuous hill and is about 0.8 mile in length.

Here is an interactive, 3D terrain view of my out and back trail run from the Victory Trailhead at Ahmanson Ranch to the Las Virgenes Trailhead via Lasky Mesa. The direct route through East Las Virgenes Canyon is also shown. The map can be zoomed, tilted, rotated, and panned using the navigation control on the right. Track and placename locations are approximate and subject to errors. Poor weather and other conditions may make this route unsuitable for this activity.

When it rains a lot, sections of East Las Virgenes Canyon can get really muddy. This route avoids the worst of the gooey, stick-on-your-shoes mud.

Update January 17, 2023. With the additional rainfall this January the “best” route up to Lasky Mesa is on the dirt road. The single track is wet and muddy in spots.  The lower half of the Beast is eroded and somewhat muddy. I have a pair of shoes that I use in the muck and wet. They haven’t dried out for weeks.

Some related posts: It was So Muddy That…, It Was So Muddy (Again) That…, When It Used to Rain in Southern California