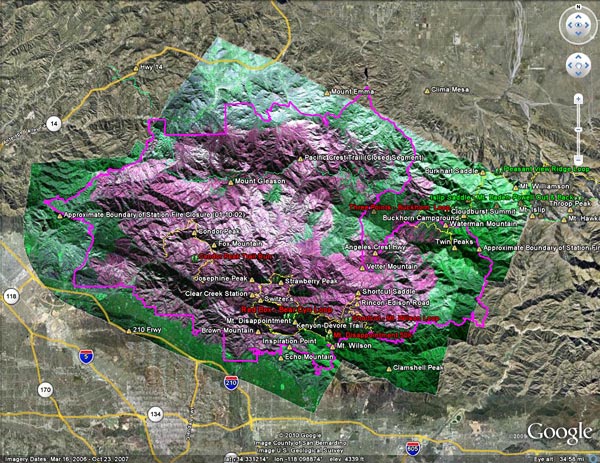 In November 2009 NASA used its Predator B remotely piloted aircraft “Ikhana” to collect post-burn assessments of the Piute Fire in Kern County and the Station Fire in the Angeles National Forest. This interactive Cesium browser View shows the area of the San Gabriel Mountains burned in the Station Fire, with an overlay of the Ikhana Burned Area Emergency Response (BAER) image. (Image courtesy of NASA Dryden and NASA Ames.)

According to NASA, the various purple hues are indicative of the differences in burn severity. The view can be panned, zoomed and tilted (help info) in order to get an idea of the burn severity along a particular trail, or in a particular area. This can be used with other assessment data and on the ground observations to evaluate burn severity. Here is the BAER Station Fire Soil Burn Severity Map (1.1MB PDF) from the Forest Service. Additional BAER information can be found on the Angeles National Forest Station Fire BAER page.

Earlier this week Angeles National Forest reopened some areas of the forest closed by the Station Fire, and issued Forest Order 01-10-02, redefining the boundary of the Station Fire Closure Area. The magenta line in the previous view, and in this Cesium browser View without the burn severity overlay, is the approximate boundary of the Station Fire Closure Area as derived from Angeles National Forest Order No. 01-10-02, Exhibit A and Exhibit B. The boundary, as depicted, is intended to provide a general overview of the closed area — not an exact rendering. Please contact Angeles National Forest to determine whether a particular resource is open or closed. Note, for example, that a road may be open or closed depending upon which edge of the road is the boundary.

One of the reasons for putting this information together was to check the status of several peaks and trails. With so much of the forest closed it is essential that every trail and area that is in reasonable condition be opened to the public. For example, the north approach and summit of Twin Peaks are outside the burn area but remain closed. The trail from Buckhorn to Twin Peaks Saddle and up to the peak should be open, and if the short section of trail burned near Three Points is OK, trail 10W04 from Three Points to Mt. Waterman and Twin Peaks should be opened.

GPS traces of some trail runs inside and outside the Station Fire area have been added to both Google Earth views, along with links to related photos and stories. Trail runs that fall partially or entirely inside the closure area have a red label. Click on the green hiker icon for additional info. Some placenames have also been added –the locations should be considered approximate.