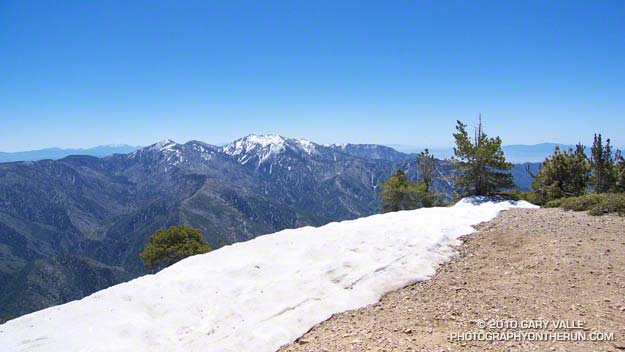 Yesterday, Woodland Hills topped the 90° mark for the first time this year. But somebody forgot to tell the local mountains about the warmup. This morning, I was about a mile into an out and back trail run from Islip Saddle to Mt. Baden-Powell, and with the wind chill, it felt like the temp was in the 40’s.

It was chilly in running shorts, and I debated pulling some warmer clothes from the pack. In addition to a short-sleeve shirt, I did have on a pair of pull-on long sleeves. For the moment that seemed to be enough. Rounding a corner, the trail leveled, and up ahead I could see a hiker headed my way. Based on the time, I figured he was descending from Little Jimmy Campground. We exchanged greetings, and as we passed, he commented, “you know there’s a lot of snow on the trail.”

This Spring the weather in California has been dominated by a series of cool troughs, slowing the snow melt and in some cases adding to it. It its May 27th Summary of Snow Water Content, California Cooperative Snow Surveys reported the statewide snowpack at nearly twice the normal amount for the date. Squaw Valley reopened for Memorial Day weekend; and with over 100 inches of snow since April 1, Mammoth Mountain plans to operate through July 4.

On the shaded, north facing slopes of Mt. Islip there was more snow than I’d seen since the Spring of 2005.  It couldn’t be avoided. However, the route was well-traveled, and where there was snow, dirt-covered steps eased the way. I had picked up a short length of downed fir, and it worked OK as a crude ice axe, or if you prefer, a stubby trekking pole. It enabled me to move a little faster, and had the added benefit of keeping my upslope hand out of the snow.

It didn’t take long to reach Windy Gap (7588′), and soon I was working up the trail to the gap above Windy Gap. Here the trail winds through a ghost forest of old growth trees, burned in the 2002 Curve Fire. Recovery has been slow, and it was heartening to see a young Jeffrey pine in the midst of all the deadwood. It also gave me a sobering perspective of the time that was going to be required for the recovery of the forests decimated by the Station Fire.

The trail climbs up to the crest of the San Gabriels near peak 8426, about a mile east of Windy Gap. From here it more or less follows the prominent divide all the way to Mt. Baden-Powell (9,399′). It’s the “more or less” part that’s key in a snowy year. The shaded north side of the divide may be completely snowbound, while the crest and south side are snow free. The way the ridgeline is oriented, storm winds create deep bands of snow along and just north of the crest. In places the trail can be buried in several feet of snow.

On the east side of Mt. Hawkins I checked out a tree that had been struck by lightning, and then continued along the ridge. The wind was little more than a breeze now, and the temperature comfortable. I pulled off my running sleeves, and then followed the trail across the warm, south facing slopes of Throop Peak. Sometimes on the trail, and sometimes on the crest, I descended to a saddle and then climbed up and over Mt. Burnham (8997′).

On the summit of Mt. Baden-Powell there was almost no wind. The sun was warm and the air clear. Across Vincent Gulch Mt. Baldy gleamed alpine white, its summit ridges still heavy with corniced snow. Many miles to the east, snow could also be seen on San Gorgonio Mountain, and Mt. San Jacinto. A Clark’s nutcracker complained raucously from the top of a Lodgepole Pine, and I assured the bird that I would be leaving the summit soon.