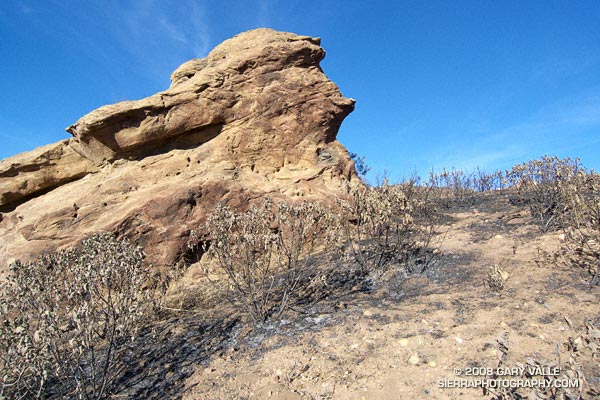 This weather worn sandstone boulder is a familiar landmark to those who do the Chumash Trail. It’s a little less than a mile up the trail, and is at the point where the trail turns east and continues its climb along a cobble strewn divide. The chaparral here and elsewhere along the Chumash Trail was burned last week by the western front of the Sesnon fire.

In the areas bordering the Chumash Trail, the Sesnon Fire appears to have been much less intense than the 2003 Simi Fire. In the case of the Simi Fire, it had been about 15 years since the area was burned, the fuel load was moderately high, and the fire intensity was such that nearly all plant materials were consumed down to the mineral earth.

Recovery from the Simi Fire has been primarily through the slow processes of basal-sprouting and seed germination. Just prior to the Sesnon Fire, common chaparral plants such as chamise, yerba santa, toyon and holly-leaved cherry had recovered about 70% to 90% of their 2003 size.

The recency of the Simi fire appears to have reduced the fuel load available to the Sesnon Fire. In many cases grasses and other annuals (many invasive) were consumed, but adjacent chaparral shrubs were only scorched. Many of these shrubs look like they will probably be able to recover through foliage replacement, rather than crown-sprouting. One exception might be laurel sumac, which appears to have been less fire tolerant.

In addition to reducing the fire danger, a little light rain would help jump start the recovery process. Computer weather models have been hinting at a change in the weather around November 1, and now seem to be converging on the possibility of a shower in Southern California around Halloween, followed by a front and some rain later in the weekend. That’s still a week away, so we’ll have to see!

Here’s a Google Earth image and Google Earth KMZ file of the perimeters of the Sesnon and Simi Fires, as well as GPS traces of some of the trails in the area.