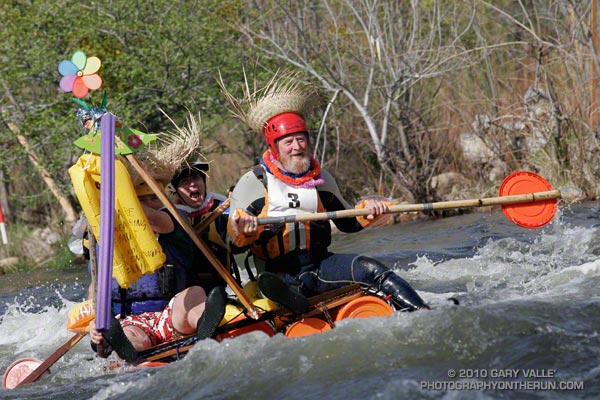 This year’s Kern River Festival had the best weather and water the event has seen for several years. Racers had a great flow for paddling the waterfalls, steep drops, and slides on Brush Creek; and boaters enjoyed paddling a challenging slalom course through the whitewater of Riverside Park in downtown Kernville.

A new event this year, the Hooligan Boat Race, was a spectator and participant favorite. Inspired by the event at the FIBArk River Festival, paddlers constructed their own boats out of “non-boat” materials and attempted to paddle their creations from upstream of the bridge in Kernville, down through the class II rapids in Riverside Park.

The photograph above is of “Al’s Original Bucket Boat.” Usually a bucket boat refers to a raft that isn’t self-bailing, but in this case the boat is made of buckets, and the paddles from bucket lids.

As you might expect there were some outrageous designs, and not every boat made it to the finish line.

Next year the Hooligan Boat Race is expected to be even more popular. The Kern River Festival is held annually, the third weekend in April, in Kernville, California. In 2011 it is scheduled for April 16-17. (Easter is April 24, 2011.)