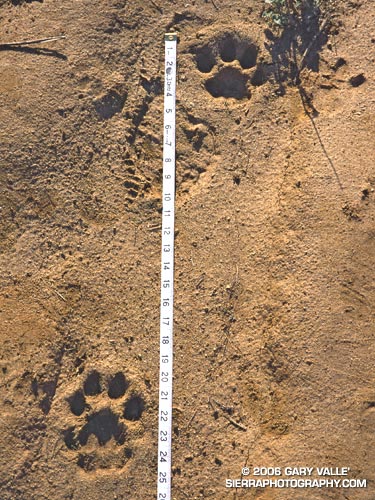 Nature isn’t necessarily nice. Behavior and interactions among animals are often violent. So it is with mountain lions. But the mountain lions of the Santa Monica Mountains also have to cope with the additional problems of living on an island of lion habitat in the middle of an ocean of urban sprawl. 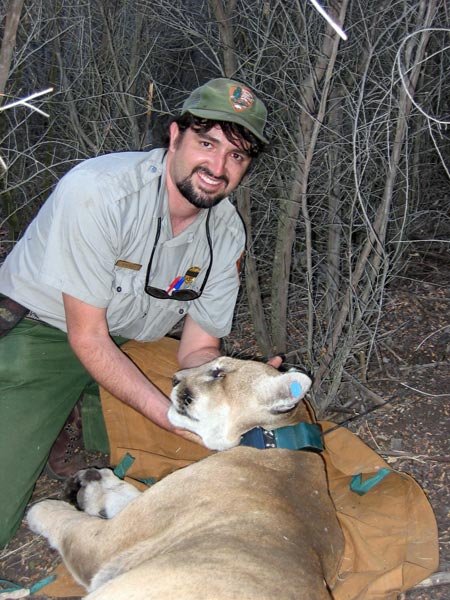 The mountain lion tracks above were photographed on a run at Sage Ranch Park in late January 2000 . They might have been made by a young male mountain lion designated P3, whose territory encompassed this area. There is also a possibility there were from an older female lion, P4 that frequented the Rocky Peak area. Unfortunately both these animals were killed in late 2004 by eating prey (coyote) that had eaten rodents that had consumed anticoagulant based poisons. These poisons are used by parks, schools, golf courses and housing developments for rodent control.

The P3 and P4 pumas were tracked as part of a ongoing study started by the National Park Service in 2002 to learn more about mountain lions in the Santa Monica Mountains National Recreation Area. As of May 2012, twenty-six mountain lions, P1 to P26, have been tracked, and their history has been quite a saga.

Despite high hopes for the lions and their new litter, things turned ugly in August of 2005, when P1 killed his mate P2. A few months later, in June of 2006, P1 also killed one of the 22 month-old females from the litter, P7. According to biologists these were not the actions of a lion run amuck, but were most likely related to conflicts over kills, or in the case of P2, a mother protecting her offspring. 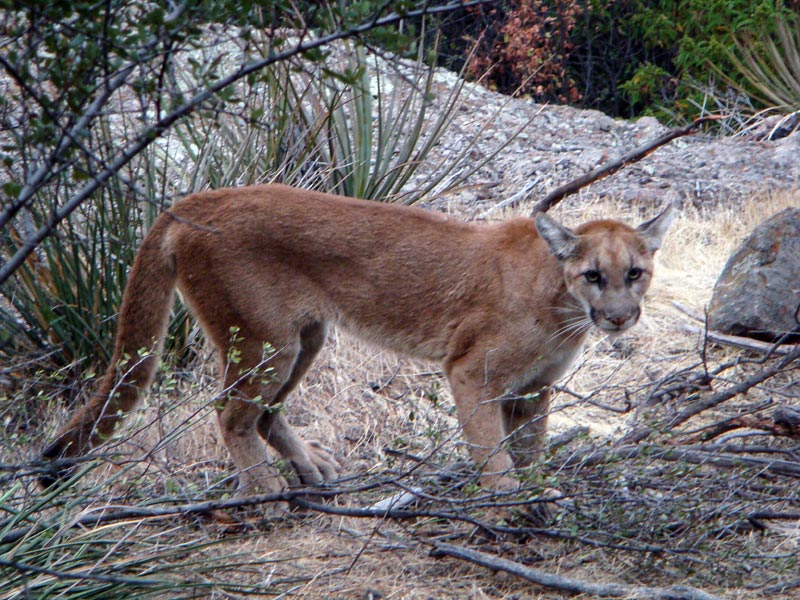 As might be expected, the young males from the litter, P5 and P8, headed for opposite ends of P1’s territory. However, urbanization and limited linkages essentially prevented their escape to other wildland areas.

In early September 2006 P5 was likely killed by P1, and in a development that surprised researchers, P8 appeared to have been killed by an unknown lion, probably male, inside of P1’s territory. The “unknown lion” was the male P9, who was killed by a vehicle on Las Virgenes road in July 2007.

One other female lion was collared and designated P13. DNA testing indicated that P13 was a daughter of P6. At that time P6 was the the only surviving lion from P1 and P2’s 2004 litter. 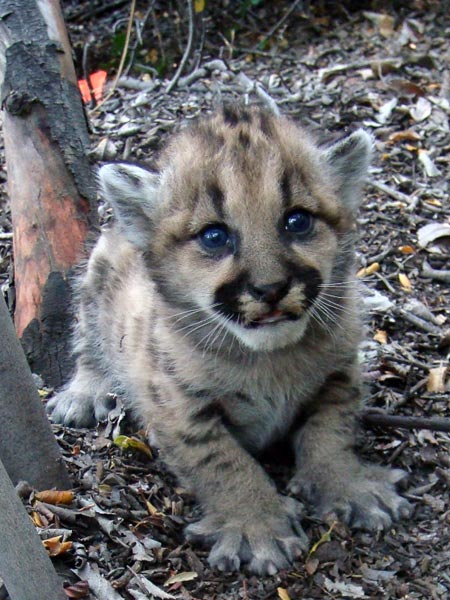 P1 appears to have been injured in a battle for dominance in March 2009. A bloody radio collar and tufts of hair were found in a tree in Hidden Valley, near Thousand Oaks. P1’s opponent was suspected to be P12, a lion collared in December 2008, and the first lion to be tracked crossing the 101 Freeway. Scat found three weeks after the fight was genotyped, and found to be P1’s.

In May 2010 P13 had a litter of three kittens — P17 (female), P18 (male), and P19 (female). The father was P12. Since P12 originated from an area other than the Santa Monica Mountains, this increased the genetic diversity of the mountain lion population in the study. P18 was killed August 30, 2011 attempting to cross the 405 freeway.

It is unclear how many male lions now inhabit P1’s original territory. P12’s collar is no longer functioning. P18 was killed August 30, 2011 attempting to cross the 405 freeway. P15 was found deceased on September 11, 2011. Reportedly another male lion has been photographed in the area. 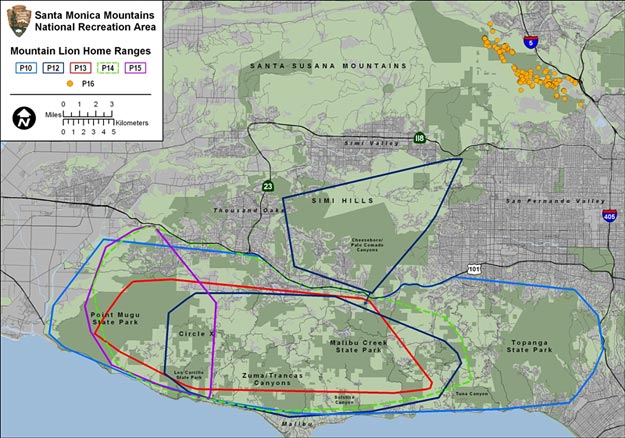 The Puma Profiles page of the SMMNRA web site lists the mountain lions that have been studied. More information, news releases, maps and photos can be found on the main NPS Lions in the Santa Monica Mountains? page.

Johanna Turner of CougarMagic.com has captured breathtaking stills and videos of the area’s mountain lions and other wildlife.

Following are some previous updates to this post, with links to additional articles and information.

Update October 24, 2012. The remains of P-25, an approximately one year old female mountain lion were discovered by hikers in Point Mugu State Park on Sunday. P-25 and P-26 (male) are the offspring of P-12 (male) and P-13. The death did not appear to be the result of a conflict with another lion. A necropsy is pending.

Update October 18, 2012. This summer NPS biologists discovered two mountain lion kittens, P-23 (female) & P-24 (male), east of Circle X Ranch in the Santa Monica Mountains. They are the offspring of P-12 (male) and P-19, a daughter of P-12. The kittens were outfitted with tracking devices.

Update June 18, 2012. Analysis of the DNA of the mountain lion killed by authorities in downtown Santa Monica May 22 revealed it is related to lions that reside north of the 101 Freeway. One possibility is that the approximately three year old lion was the offspring of mountain lion P-12. P-12 has been documented crossing the 101 Freeway in Agoura and is the only lion known to have done so.

Update May 26, 2012. Earlier this Spring biologists from Santa Monica Mountains National Recreation Area (SMMNRA) captured an adult male mountain lion in the Griffith Park area. Designated P-22, the approximately three year old lion is the first to have been photographed east of Cahuenga Pass and within the Santa Monica Mountains eco-region. The lion was fitted with a GPS collar and released where it was captured. According to Kate Kuykendall, Public Affairs Officer for the SMMNRA, preliminary genetic analysis by UCLA indicates that P22 is likely from the Santa Monica Mountains, which would mean he crossed both the 405 and the 101 Freeways.

Update November 21, 2011. On October 4, 2011 the National Park Service announced that male mountain lion P-15 has been killed. It was  the first documented intentional human-caused death of a mountain lion in the Santa Monica Mountains. P-15’s collar stopped transmitting on August 25, 2011. P-15 was was discovered on September 11, 2011, following a report of a dead mountain lion. The California Department of Fish and Game and National Park Service are seeking information related to the death of P-15 and the parties responsible. With the addition of $5000 from the City of Malibu the reward being offered for information leading to the arrest and conviction of the poachers currently stands at $16,700. The DFG Cal Tip Hotline is 1-888-334-2258.

Update August 7, 2009. According to Where the Mountain Lions Live in the Santa Monica Mountains in laist.com, P1 may have survived the fight with another mountain lion back in March. DNA from scat collected about two weeks after the fight matched P1!

Update March 28, 2009. There was sad news earlier this month. According to an article in the Daily News, mountain lion P1, the long standing patriarch of the Santa Monica Mountains, appears to have lost a battle for dominance with another mountain lion. A bloody radio collar and tufts of hair were found in a tree in Hidden Valley, near Thousand Oaks. P1’s opponent is suspected to have been P12, a lion collared in December, and the first lion to be tracked crossing the 101 Freeway.

Update October 6, 2008. The Ventura County Star reported that a young male lion was found dead October 2 on the 118 freeway, just west of Rocky Peak Road. A wildlife passageway crosses under the freeway nearby and has been used by at least one other lion. On July 18 a mountain lion was reported in the area of the Chumash Trail.

Update May 1, 2008. NPS wildlife biologists are currently aware of 4 lions in the Santa Monica Mountains — 2 recently radio-collared young males designated P10 and P11, and P1 and P6. There is probably at least one more female, the mother of P10 and P11. A remote camera picture has also been taken of a lion in the Simi Hills.

Update January 25, 2008. An article in the Simi Valley Acorn reported that on January 13, 2008, a mountain lion was discovered in an abandoned building near Chatsworth Reservoir. Two days later there was another mountain lion sighting in the nearby Simi Hills by employees at the Santa Susana Field Laboratory.

Update August 7, 2007. According to an article in the Malibu Times, on July 31 a five or six year old mountain lion, was hit by a car near the tunnel on Malibu Canyon Road and died shortly thereafter. The mountain lion, designated P9, was recently collared, and along with P1 and P6 was one of three mountain lions being tracked by the NPS. There is speculation that P9 may have been the unknown lion that killed P8.