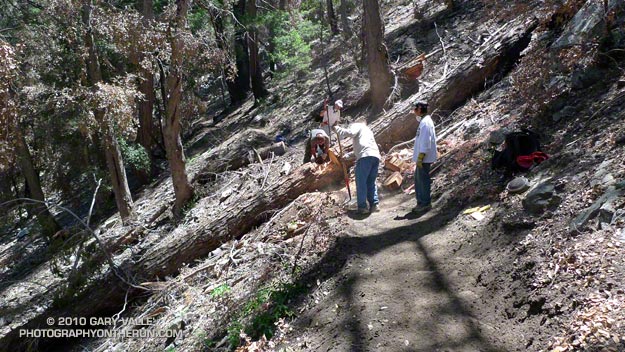 Last year’s Station Fire, and the Winter storms that followed, combined to damage many miles of trail in the San Gabriel Mountains. Among the volunteers working hard to restore the trails are runners that will doing the Mt. Disappointment 50K and Angeles Crest 100 mile endurance runs later this Summer.

Gary Hilliard, trail maestro and R.D. of the Mt. Disappointment runs, dedicates an astonishing amount of time to the task of preserving trails — encouraging and organizing volunteers, surveying trails, and doing the down and dirty work of maintenance and restoration. If it’s a Summer Saturday, chances are good you’ll find him in Angeles National Forest, working with a group of runners to make a trail better.

Today’s trail was the Kenyon DeVore Trail on the north side of Mt. Wilson. Originally a part of the Rattlesnake Trail, the trail was renamed in tribute to the Forest Service patrolman, hydrographer, and Angeles National Forest volunteer, Kenyon DeVore. The trail is the toughest part of infamous final leg of the Mt. Disappointment 50K and 50 mile courses, climbing about 2300′ in 3.6 miles.

There was plenty to do on the Kenyon DeVore Trail, and Gary divided us into three groups. One group was given the job of restoring a long stretch of trail that had been obliterated by debris flows, and another group was assigned the chore of clearing a rock slide. Our group’s task was removing several trees that had fallen across the trail, and working on the trail along the way. 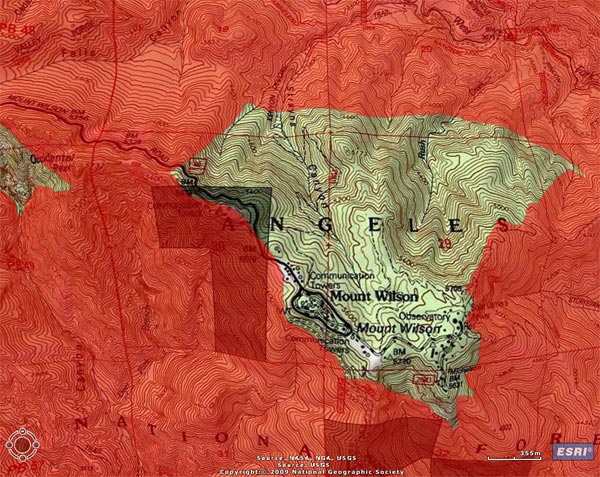 The largest of the trees blocking the trail was a sizable bigcone Douglas-fir. At the point where it was cut, the diameter of the trunk was about 26″-28″. For its size, the tree was surprisingly old. A rough count of the rings from a contrast enhanced photo gives an approximate age of 310 years. The age was not cross dated, but appeared reasonable when compared to a standard tree ring chronology.

The cut sections of the tree had no obvious fire scars. The CDF/FRAP Fire History Database indicated that, prior to the Station Fire, a large part of the canyon in which the tree was located had no reported fire history.

When we were done, about two-thirds of the Kenyon Devore Trail had been restored. No worries about the other third, Gary has trailwork scheduled most weekends through the end of July.