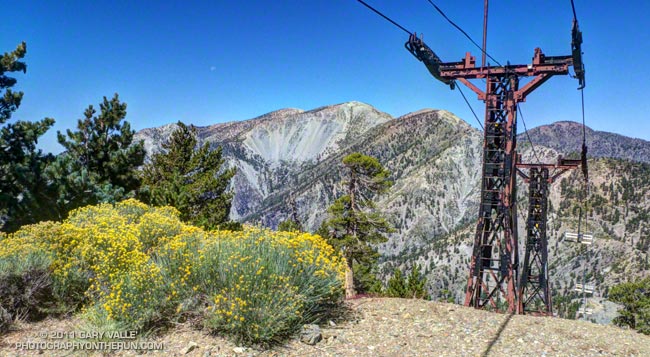 Today was the first chance I’d had to get back to Mt. Baldy since the Run to the Top was called 45 minutes into the race on Labor Day. Thunderstorms were the problem that day, but not today. The waning moon was the only blotch of white in the cloudless sky, and it wasn’t going to cause any weather problems.

Part one of the plan for today’s run/hike was to do a “run to the top” of Baldy using the ski hut trail. That would help make up for the incomplete race on Labor Day. Part two was to do some peakbagging and climb West Baldy, Mt. Harwood, Thunder Mountain and Telegraph Peak. Relatively close together, these peaks can be done as part of an 18 mile adventure, with an elevation gain and loss of about 6000′.

Climbing Baldy via the ski hut trail is about three miles shorter than the Run to the Top route via the Notch, but takes me about the same amount of time. Ultimately it’s the rate of climb that can be sustained that determines your speed up the peak, and the elevation gain by either route is about 3900′. The ski hut trail can be busy, but I enjoy climbing the peak by this route. The tradeoff is that it is steeper and is less runnable.

Without some weather to stir things up, the views from the summit of Mt. Baldy were a little hazy, but San Gorgonio and San Jacinto could still be seen off to the east, Saddleback to the south, and Mt. Baden-Powell and other peaks of the San Gabriels to the northwest. I could also see Telegraph Peak sitting behind Thunder Mountain, and wondered how the trail between them was going to be.

After doing the half-mile jog over to West Baldy, I returned to the summit of Baldy and descended to the Baldy-Harwood saddle. Mt. Harwood is another one of those peaks I’ve run past many times. Harwood sees far fewer ascents than Baldy, but enough so that a path has developed from the Baldy-Harwood saddle up its broad west ridge. Today, save a a red-tailed hawk cruising by, its summit was empty.

Continuing along Harwood’s elongated summit, I began to work down the peak’s east ridge, staying on its crest. The east ridge is steeper and much less traveled than the west ridge. It is an extension of the Devil’s Backbone and its north side is a steep, crumbly precipice that drops more than 3000′ to Stockton Flat. The views along the ridge are excellent, but some care is required.

The east ridge of Mt. Harwood rejoined the trail at the Devil’s Backbone. From there it took about 15-20 minutes to run down to (just above) the Notch and start up the service road that leads past the new snow making reservoir to the top of Thunder Mountain. I’d been to the top of Thunder several times and by several means — by ski lift, by mountain bike, and by foot during the Baldy Peaks 50K. In that race Thunder had been the final challenge after climbing Mt. Baldy twice — once from the village and once from Manker Flat.

Maybe because of pushing the pace on the ski hut trail, I was pretty worked going up the road to Thunder, and wondered if I was going to be able to make it to Telegraph Peak before my loosely set turnaround time of noon. I’d hoped to get back down to the car and on the road by around 1:30 pm, and felt like I was running a little behind.

But Telegraph is a compelling peak, particularly when viewed from the northwest, and from Thunder Mountain it only took about 30 minutes on the Three Tee’s Trail to get to its summit. In another 30 minutes I was back at Thunder Mountain, and looking forward to the five miles of downhill that would take me back to the car.