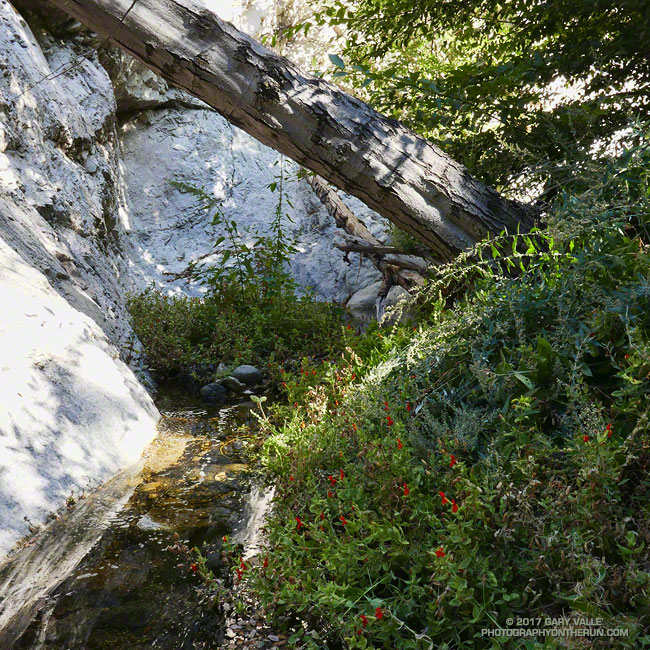 Running or hiking the Bear Canyon Trail is always an adventure. The loop from Red Box, past Mt. Disappointment, down Mt. Lowe Road, over to Tom Sloan Saddle, through Bear Canyon, and up the Gabrielino Trail is about 15-16 miles long. But it isn’t it’s length that makes it interesting.

The two miles of trail between Tom Sloan Saddle and Bear Trail Camp is isolated and little-used. The difficulty of the trail above the camp varies from year to year, and today it was a bit more challenging than usual.

Copious Winter rain had promoted the growth of all things green in the canyon — including much poison oak and stinging nettle — and the trail wasn’t always easy to follow. Thunderstorms had recently washed away any tracks, so the only sign on the trail was bear scat and some cut trees from years past.

Because of the lush growth, fallen trees, brush, fire debris and flood debris, the trail ahead sometimes looked very improbable. A couple of times I stopped and walked back up the trail a few steps to confirm the trail was a trail and I hadn’t missed a turn. The path repeatedly crossed the creek and the creek is where the difficulties tended to be. In places the poison oak and nettle blocked the way and were not easily avoided.

Dealing with the poison oak was easy — I just ignored it. That’s something I could worry about later. Hopefully the Technu Extreme I had in my car would take care of it. On the other hand, when you are bare-legged and bare-armed ignoring stinging nettle is a hard thing to do — contact with the plant produces instantaneous burning and stinging.

I always thought formic acid was the culprit, but apparently stinging nettle’s micro-needles contain a potent blend of chemicals that produces a poorly understood and unusually prolonged reaction.

There isn’t much you can do about the burning and stinging in the middle of a run or day hike. Some say flushing the affected area with water (without rubbing) can help. If you Google “first aid stinging nettle” you’ll see various suggestions. By the time I reached Bear Canyon Trail Camp my legs felt like they had been painted with horse liniment.

The trail between the trail camp and the canyon’s confluence with Arroyo Seco is well-used and is usually in better condition than the trail above the camp. From the confluence it’s about a mile to the Gabrielino Trail, which is followed past Switzers Picnic Area to Red Box.