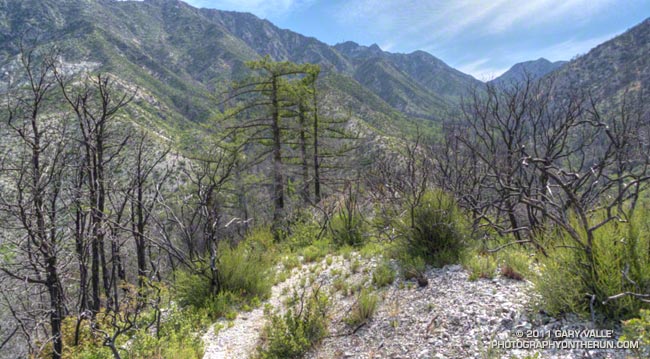 Most Southern Californians have direct experience with wildfire and its effects. Wildfires are often described as being a “natural part of the ecosystem,” but in Southern California wildfire is anything but natural. Urbanization, land management policies and firefighting practices shape fire frequency, behavior, intensity and effects — often with unexpected and tragic consequences.

According to InciWeb, the Station Fire started on Wednesday August 26th, 2009 at approximately 03:30 p.m. and was fully contained at 7:00 p.m. on Friday, October 16, 2009. Two firefighters were killed in the arson caused blaze, numerous homes and structures were lost, and 160,577 acres burned. The fire was the largest recorded in Angeles National Forest since it was established in 1892 and the 10th largest fire in California since 1933.

In January 2011 the Station Fire Closure was updated and extended to January 2012. At that point, it looked like it might be a long time before any substantial part of the closure area would be opened to the public. But with increasing public pressure to open more of the Forest, Angeles National Forest reopened about half of the Station Fire Closure area earlier this week. Today I did a run/hike in the newly opened area to see first-hand how recovery from the fire, and subsequent debris flows and flash floods, is progressing 19 months after the fire was contained.

The first areas I wanted to check were Bear Canyon, and upper Arroyo Seco from Switzer Falls to Red Box. I’d done loops through these areas in April 2009, a few months before the Station Fire, as well as in March 2007 and November 2005. Because Mueller Tunnel was closed, I couldn’t do the same loop as in 2009, but I could bypass the tunnel using the Mt. Disappointment Trail, and then drop down into Bear Canyon from the Mt. Lowe Truck Trail. From there the loop could be completed by following the Gabrielino Trail from near Switzer Falls, back to Red Box. After checking with the Forest Service that all of the trails were open, the loop was a go!

I’d done all the sections of the loop on previous runs, and was familiar with the trails and terrain. My intent was to follow the routes of pre-existing trails as closely as possible. Just in case, I took a paper map; and as a backup and source of extra info, I loaded my GPS with the track points of the trails. It turned out the GPS did help a couple of times to follow missing or overgrown sections of trail, but there was also more than one instance when blindly following the GPS would have led me in the wrong direction.

At around 7:30 I left an empty Red Box parking lot and started running up the Mt. Wilson road. About 0.4 mile up the road I turned onto the San Gabriel Peak/Mt. Disappointment Trail and began working up toward the saddle between the two peaks. Nearly all of the trail to the saddle was unburned. The robust mix of chaparral and forest towered overhead, and a few minutes later I felt some anguish as I crossed the saddle and entered the burn area.

There was a little more debris than normal on the rocky stretch of the Mt. Disappointment Trail that crosses the west face of San Gabriel Peak, but the trail was mostly runnable, and it didn’t take long to get down to the Mt. Lowe Truck Trail fire road. At Markham Saddle a DANGER sign marked the closure of the road to Mueller Tunnel.

Turning in the opposite direction, I started running down the fire road, and after a short distance, stopped to take photos of the Bear Creek drainage. It looked to be in pretty good condition, considering. The side canyons didn’t have the runnels and debris flows I’d seen in upper Arroyo Seco on the drive up Hwy 2. I’d be getting a closer look at those channels later in the run.

At the hairpin turn west of Mt. Lowe I left the fire road and picked up the trail that leads down the ridge to Tom Sloan Saddle. It had taken about an hour and a quarter to get to this point, and I suppressed an overly optimistic thought that I might reach Red Box by noon or so.

As would be expected with little or no use, two seasons of growth, and a wet winter, sections of the trail were really overgrown. The upper part of the Bear Canyon Trail was also significantly overgrown, and in a couple of places difficult to follow. It helped that animals had used the trail, though their path through the grass was indistinct. Trails are valuable resources that can be lost through prolonged closure and disuse.

Once down to Bear Creek, the character of the canyon was much the same as before the fire. Bear Canyon is one of the more wild and isolated places in the San Gabriel Mountains that can be accessed by trail. Not far beyond the old cabin site, I paused by the creek and absorbed the sounds, smells and scenery of this special place.

The creek was incised in places, and there was other evidence of moderately high flows in the two years since I had been there. Very little remained of the use trail. The remnants of the old Tom Sloan trail are still there, but these are few and far between. There were more fallen trees, and a ton of poison oak. It was time consuming to try and dance around the poison oak, and about halfway through the canyon I gave up trying. Bear Camp appeared to be unscathed, and looked much like it did in 2009.

It took twice as long to work through Bear Canyon as in 2009, and I was happy to get to Bear Creek’s confluence with Arroyo Seco. Except for a couple of fallen trees, it was straightforward getting back to the Gabrielino Trail and to the Switzer Picnic Area. The bridge at the picnic area was littered with flood debris. The high water likely occurred during our record-setting December 2010 rain event.

It was a close call, but no doubt due to the efforts of firefighters, Switzer Picnic Area appeared to have survived almost unscathed. The Forest Service has made a number of improvements to the facilities. According to a Forest Service press release, the picnic area will remain closed until sometime in June, while construction is completed.

The first two miles of the Gabrielino Trail above Switzer really took it on the chin. The fire effects there were very pronounced, and of all the trails in the loop, that segment was the most severely affected. Flash flooding and debris flows have swept the canyon, obliterating sections of trail. The rest is very overgrown. Virtually every tributary canyon is now incised with debris flow runnels, up to several feet deep.

Once away from the canyon bottom and on the old road bed the trail was still overgrown, but was generally in better shape and easier to follow. The last mile to Red Box was nearly in the same condition as before the fire, and the last half-mile (where some trailwork had been done) even better!

In the last decade I’ve followed the recovery and studied aspects of several fires including the 2002 McNally Fire, 2002 Curve Fire, 2003 Simi Fire, 2005 Topanga Fire, 2006 Day Fire, 2007 Corral Fire and 2008 Sesnon Fire.  Even after having observed it many times, I continue to be amazed at the resilience of fire-adapted ecosystems. As long as the fire recurrence interval isn’t too short, nature seems to do a pretty good job of recovery.