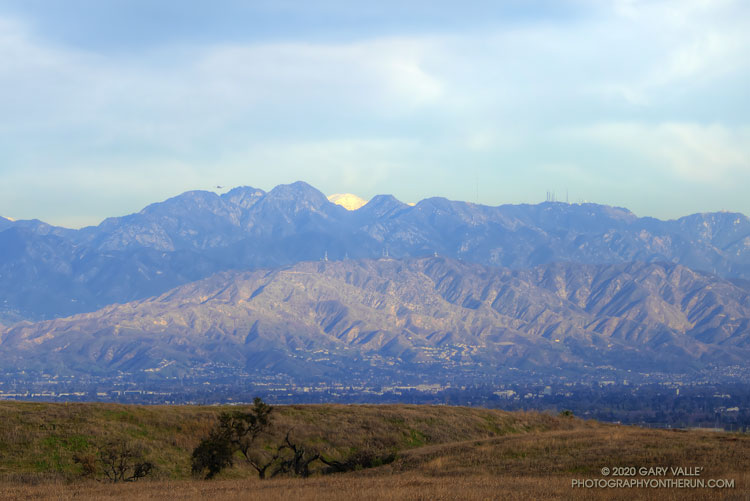 On Winter days when the sky is clear and the visibility is good, the view of the San Gabriel Mountains from Lasky Mesa can be surprisingly detailed. In those conditions you’ll sometimes see a brilliant patch of white in the distance, through a gap in the mountains.

There are a number of peaks in the San Gabriels that are high enough to be snow-covered. Which one is it?

I suppose I could have used an app to ID the peaks on the skyline, but another way would be to draw a line on a sufficiently detailed map and “connect the dots.” The line would be drawn from Lasky Mesa, through the gap, and then extended to a mountain that would have snow. An easy way to do that is to use the “Measure” tool in Google Earth.

The title photo was taken from what used to be the helipad site on Lasky Mesa. (The work currently occupying that space was the subject of a previous post.) The gap in the mountains is the saddle between San Gabriel Peak (left) and flat-topped Mt. Markham.

Drawing the line in Google Earth reveals that the snow-covered mountain is Mt. San Antonio (10,064′) — generally referred to as Mt. Baldy. The peak is about 60 miles distant. Here’s a closer view with some of the peaks identified.