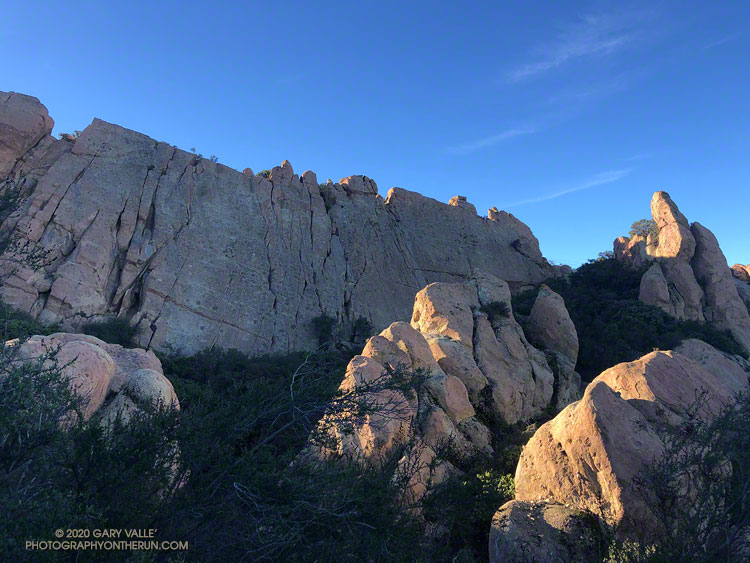 The range of temperatures had been remarkable. At the Secret Trail trailhead in Calabasas, where I left my car, it had been a balmy 60 degrees. Near the start of my run from the Tapia Trailhead in Malibu Canyon, it had been a very chilly 32 °F. Near the end of the run, the temp topped out at 79 °F. That’s SoCal Winter running!

On the way to Saddle Peak, I was surprised to see how wet it was on some sections of the Backbone Trail. There has been very little rain this January, but marine layer dew, the trail’s north-facing aspect, the low sun angle, the canopy of bays and oaks, and relatively cool temps have kept the trail damp. In places it looked like it had just rained yesterday.

Because there’s about 1000′ less elevation gain, I usually do this run in the opposite direction, starting on the Secret Trail and ending at Tapia. This is the route described in the venerable guidebook, 50 Trail Runs in Southern California. But I’d run it in that direction a bunch of times — so here I was, chugging up the Backbone Trail, nearing the end of a 2600′, seven-mile climb from Tapia to Saddle Peak.

The area around Saddle Peak is yet another spectacular section of the Backbone Trail. (There are so many!) Just west of the peak, the trail winds through a narrow passage with massive sandstone rocks on either side. As the trail levels out, there is a short spur trail to the peak’s antennae-infested summit.

Even if a little obstructed, views from the top extend to Catalina, Boney Mountain, Mt. Pinos, and Mt. Baldy. Sometimes San Gorgonio Mountain and San Jacinto Peak can be seen beyond Mt. Baldy. The round trip to the summit of Saddle Peak adds about 0.8 mile. The eastern summit is slightly lower, but no antennae obstruct the view.

Getting to Saddle Peak from the Tapia trailhead is relatively straightforward, if a bit strenuous. Getting to Calabasas Peak and the Secret Trail from Saddle Peak is not as simple.

If doing the regular route, note that the Stunt High Trail crosses Stunt Road twice on the way down. In each case turn right and follow the road east about 100 yards to pick up the trail on the other side of the road. There are also various side trails to avoid.

I had been planning to do the regular route, but as I was returning to the Backbone Trail from Saddle Peak, it occurred to me there was a way to avoid backtracking. Instead of turning left on the Backbone Trail and descending to the Stunt High Trail, I turned right and continued east, past the water tank, to the Lois Ewen Overlook. From there, I ran over to the Topanga Lookout and then scrambled down Topanga Lookout Ridge to Calabasas Peak Mtwy.

This option is more adventurous, but requires good route-finding skills and being comfortable clambering down a rocky ridge. This 3D Cesium interactive view shows a GPS track of my route. The yellow track is today’s route. The red track is the usual route between the Backbone Trail and Calabasas Peak Mtwy. The view can be zoomed, tilted, rotated and panned. Placemark and track locations are approximate and subject to errors.

Scrambling down the ridge put me at “The Bench,” at the junction of Calabasas Peak Mtwy and Red Rock Road. This is a little more than a mile from Calabasas Peak. Once on Calabasas Peak, it was only about 0.6 mile to the top of the Secret Trail, and from there about 1.3 miles of mostly downhill running to the trailhead.

With about 4000′ of gain over 14 miles, it was a demanding route, with challenging route-finding and a fun scramble down a rocky ridge. Here are a few photos taken along the way.