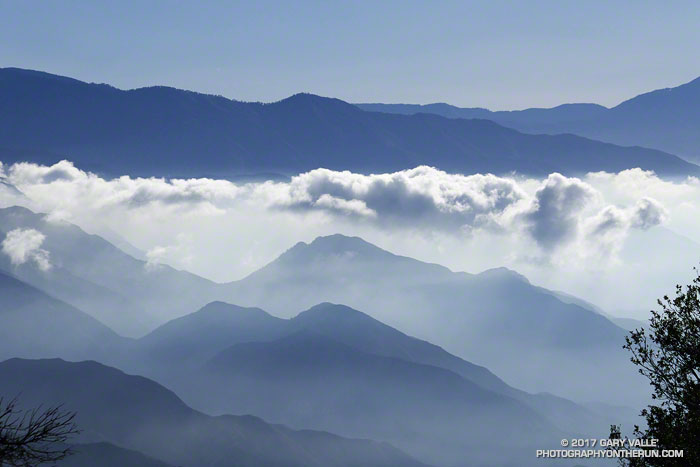 I’d just finished an 18 mile loop from the top of Mt. Wilson and was changing my shoes, when I noticed a group of six hikers walking down the Mt. Wilson loop road toward me. I’d started my run before the Mt. Wilson gate was open and was parked in a turnout near the top of the Kenyon Devore Trail.

The run over to Newcomb Pass, down to Chantry Flat, and then back up to Wilson had gone well. If you don’t mind a little Poodle-dog bush and a lot of poison oak, the Rim Trail is one of the hidden gems of the San Gabriels. And the Gabrielino Trail’s excursion through the forests and along the creeks of Big Santa Anita Canyon is a classic.

When the group reached me, one of them asked,”We’re looking for the Winter Trail, do you know where that is?” I did know where the Upper Winter Creek Trail was, because I’d just been at the top of it about 45 minutes earlier.

With its maze of antennae, telescopes and other facilities, it’s not uncommon for hikers and runners unfamiliar with the top of Wilson to become temporarily misplaced. The trails are, of course, on maps — including Google Maps — and described in various online and offline resources.

In this case the hikers didn’t know where they had parked and they didn’t know the route that had taken up the mountain. If you don’t have a clue where you need to go, a map isn’t very useful.

When I described where they needed to go, there were groans all around.

It was midday, the weather was good, it wasn’t hot, they had water and a phone, they would be hiking mostly downhill, and there were plenty of other hikers on the trail. Unless they did something really stoopid, it was just going to be a long day.