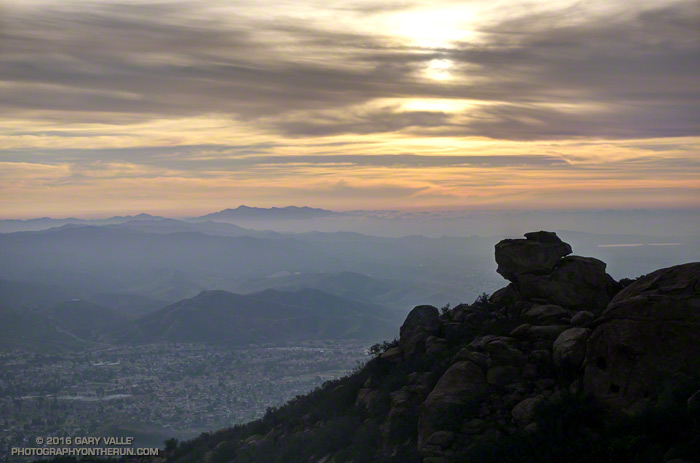 Been enjoying the views from Rocky Peak Road a lot this past month. That’s Simi Valley, with Boney Mountain in the distance. On a clear day the view extends to the Channel Islands.

That viewpoint is at about mile 4.5 of the Bandit 50K/30K/15K and there are many other superb views along the way. This year, as a result of the L.A. Marathon date change, the Bandit races were moved from President’s Day weekend to January 30. El Nino or not, we had near perfect running weather for the event. Thanks to Randy, Sarita & crew and all the volunteers for all the work putting together the eight edition of the Bandit Ultra Trail Run!

The Tuesday following Bandit I’d run farther than planned, so on Wednesday the plan had been to drive over to Simi Valley and do a short recovery run/hike up the Chumash Trail. As I parked on Flanagan Drive, it occurred to me it would be a good day to see if the linkup from the Chumash trailhead to the Hummingbird trailhead was once again possible. The 9.3 mile Hummingbird-Chumash loop used to be a favorite, but because of construction I had not done the loop since 2010. An out and back to check out the first couple of miles of the loop would be the perfect recovery run!

I was happy to discover the trails east of Chumash Park and behind the cemetery had not changed. Construction of the extension of Mt. Sinai Drive appears to be mostly complete, but residential construction along the street is ongoing. The work day was ending, so running the quarter-mile stretch of Mt. Sinai Drive to get to Kuehner didn’t seem to be an issue.

Once on Kuehner my thought was, “What now?” The run was going to be too short if I turned around, so I decided to go just “15 minutes up the Hummingbird Trail.”

Right… I soon found myself most of the way up the trail and estimating what time I needed to get to the top of Hummingbird in order to make it to the Chumash Trail and complete the loop before dark. I’m sure my pace was not too far off what it had been in the 50K, just a few days before. At some point an official trail is supposed to link the bottom of the Chumash and Hummingbird Trails, and I hope that is in the not too distant future.

The single track trails in Rocky Peak Park — and even Rocky Peak Road — tend to be technical. It’s excellent training and I try to run there at least once a week. A run I’ve been doing frequently is an out and back from the Chumash trailhead to an airy overlook near Rocky Peak. (This run also passes the point on Rocky Peak Road where the title photo was taken.) Today, as I approached the overlook I saw that it was occupied by a pair of large ravens.

Often seen in pairs, ravens are perceptive, intelligent birds. Depending on the situation, they can be somewhat tolerant of humans. Sometimes it is possible to pass within a few feet of them and not make them fly. They really don’t want to waste the energy if they don’t have to.

As I worked up the path to the overlook I could see that the birds were watching me intently and trying to decide if I posed a threat. Knowing they are curious birds, I clucked my tongue in an attempt to mimic one of their more simple calls. Perhaps they were perplexed by the garbled raven-talk coming from the troublesome, large, bipedal, wingless creature. In any case they didn’t fly and continued to watch me. As “politely” as I could, I moved up and about four feet to their left, sharing the high point. For seconds I stood by them on the overlook, enjoying the view.

I’d flown a hang glider from a point such as this and understood why it was so special to the birds. With care, I turned away from them and walked down an alternate path. Slowly turning my head, I could see they had not flown.