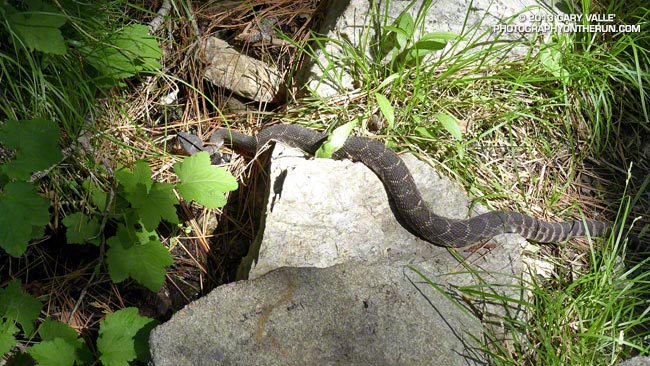 My most unusual rattlesnake encounter to date was while kayaking the Forks of the Kern in the southern Sierra Nevada. I had just done the entrance move on the rapid Big Bean and had stopped in a small eddy on the left side of the river, just above the most difficult part of the rapid. My kayak was facing up river and was nearly against the bank. I was looking back over my left shoulder, mesmerized by the power of the water pouring over the big drop. Preparing to do the move, I was totally focused on the river, when suddenly — above the roar of the rapid — there was the startling buzz of a rattlesnake at my right ear. I turned to see a rattlesnake on the bank at shoulder level. Fortunately the snake just rattled and did not strike. Double-adrenalized, I peeled out from the eddy and paddled over the drop.