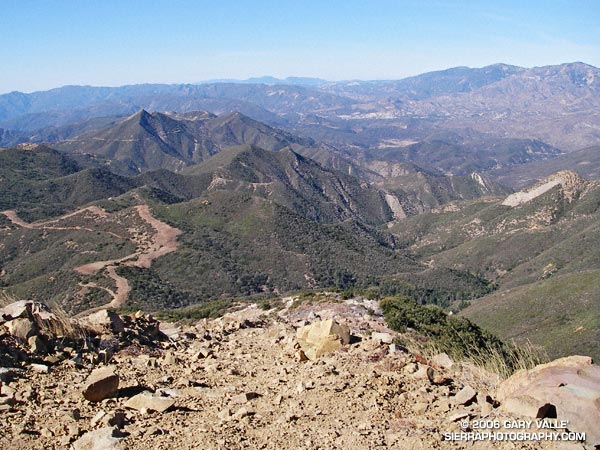 Crossing Sisar Creek, I debated running through the cool water. I had been running non-stop since White Ledge Camp, and had been pushing the downhill. It was a warm day and my feet were hot and my socks damp and gritty — it would feel great to dunk them. But gravity and the nearness of the trailhead pulled me across the gurgling creek and I continued to run.

Looking down Sisar Road I could see a couple of riders on horseback, accompanied by a hiker. As I approached them, I slowed and then walked. They asked me how far I had gone, and I replied, “Topatopa.” The hiker responded that she hadn’t been to the summit since the Day Fire threatened the area, and asked if it was open. I told her that I thought so. I had checked the updated closure map on the Los Padres National Forest web site, and the best I could tell, Topatopa Bluff (peak 6367) was just outside of the closed area.

Earlier, I had run up this road to trail 21W08, the Red Reef Trail, and then followed the recently groomed trail up past White Ledge, to Hines Peak Road.

On the way up the road, the view of the bluff had been deceptive. The highpoint wasn’t atop the the most obvious of the layered cliffs of 50 million year old Matilija sandstone, but was an indistinct summit on the left side of the formation. This Google Earth image gives a good overview of the location of the peak.

Above White Ledge Camp there had been great views of the Ojai Valley, the coast from Pt. Mugu to Ventura, and the Channel Islands. At the point where the Red Reef Trail met Hines Peak Road a large area had been cleared of brush, but had not burned. After running a few tenths of mile east on the road, I had seen hints of a trail switchbacking up through the thick brush on the west ridge of Topatopa Bluff, and left the road.

A fire break had been constructed along the crest of this unburned ridge, more or less on top of the right margin of the trail. Judging from the berms along the break, in addition to hand crews, a dozer had been used to the cut the swath. Given the steepness of the terrain, this must have been class V dozer-driving! Using the remaining segments of the trail as much as possible, I had worked my way up the final 1000′ of elevation and plodded onto the unburned summit.

It was sobering to stand at the edge of the fire area and see the full extent of the 162,702 acre fire. The day was clear, and Mt. Baden-Powell could be seen in the San Gabriel Mountains, some 75 miles to the east. To the east-northeast, past Hines Peak and in the direction of I-5 and Pyramid Lake, the earth had been burned and blackened, and nearly all vegetation appeared to have been consumed.

According to news reports, the month-long fire started on Labor Day near Pyramid Lake, more than 20 miles distant, and was not contained until October 2. Approximately 4600 firefighters from 39 states fought the fire.

Substantial portions of the Sespe and Piru Creek drainages were burned in the fire. Even without considering the effects of the fire, which generally increases runoff, these tributaries of the Santa Clara River have the potential to produce high flows. On January 10, 2005, the USGS gage 11113000 SESPE C NR FILLMORE recorded a peak flow of 85,300 cfs, and the USGS gage U11109600 PIRU CREEK ABOVE LAKE PIRU CA a peak of 40,000 cfs. Smaller creeks that extend into the burn area could also produce higher than normal flows.

In part due to a developing El Niño, an increased probability of higher than average precipitation is projected for Southern California. While an above average amount of precipitation is by no means guaranteed, the wet outlook is no doubt one of many issues being considered by the Day Fire Burned Area Emergency Response team.