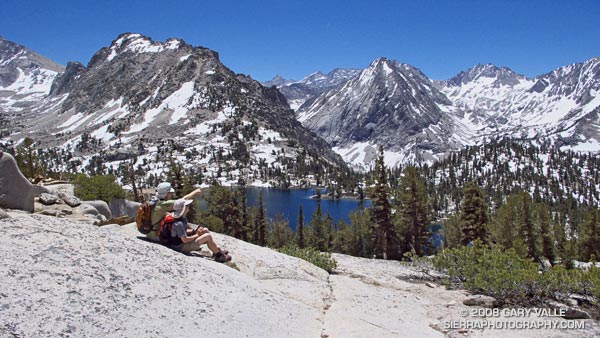 Poised on a glacial bench a dozen miles west, and few thousand feet above Independence, California, Onion Valley is the starting point for many a Sierra adventure. Kearsarge Pass provides relatively quick and easy access to the heart of the Sierra, and the more technical passes south and north of Kearsarge can be used by mountaineers to access peaks along the crest, or basins on the west side of the crest.

It is an area that is dramatically alpine, and I have returned again and again to climb peaks such as Independence Peak and University Peak and to hike, run and explore. One Summer Phil Warrender and I did a trans-Sierra hike that started here and took us over University Pass, Andy’s Foot Pass (13,600′), Milly’s Foot Pass, Longley Pass and Sphinx Pass, ending at Cedar Grove. We went superlight (about 15 lb. packs w/o ice axe), did as much cross-county as possible, and climbed a few peaks along the way.

Today Miklos, Krisztina and I were doing a reconnaissance hike/run up and over Kearsarge Pass, and down into the Kearsarge – Bullfrog – Charlotte Lakes basin, and back. The idea was to pick a time when the Kearsarge Pass trail would be mostly free of snow, but when much of the surrounding terrain would still be accented in white.

Here are a few photographs:

Big Pothole Lake from the east side of Kearsarge Pass. Nameless Pyramid (right) and University Peak (left) on the skyline.

Kearsarge Lakes and Pinnacles from the north.

Miklos and Krisztina above Bullfrog Lake. East Vidette is the prominent conic peak. Deerhorn Mountain is at the head of the recess to the right of East Vidette.

Scrambling above the John Muir Trail about a mile from Glen Pass. Charlotte Dome is in the distance.