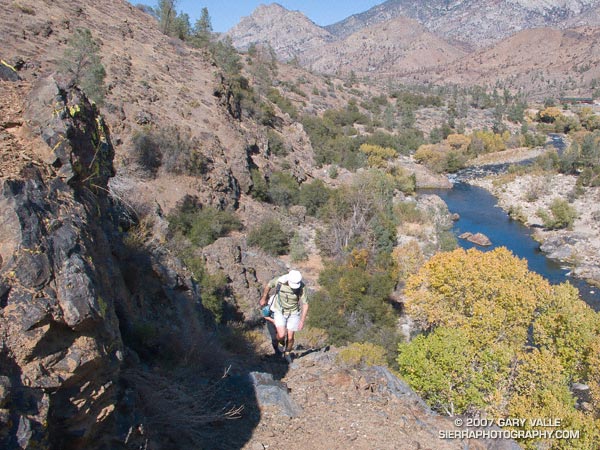 Due to fire concerns, Los Padres, Angeles, Cleveland and San Bernardino National Forests remained closed this weekend, so I headed back up to Kernville to meet some friends and run the Whiskey Flat Trail — a sizzling trail in the summertime that has been on my running to-do list for years.

Tucked away in a corner of the Southern Sierra on the banks of the Kern River, and only about a 3 hour drive from Los Angeles, Kernville usually brings to mind images of rafts, kayaks and exciting whitewater, but more than great paddling adventures can be had here.

We did the approximately 15 mile Whiskey Flat Trail north to south, starting at McNally’s Restaurant and Resort, about 15-20 minutes north of Kernville on highway Mountain 99. The trail is accessed using the Fairview footbridge and is on the opposite side of the river from the highway. It is a gnarly up and down trail, best done in cool weather, with pleasant views of the river and the surrounding mountains.

On it’s way downstream to Burlando Road in Kernville, the trail crosses several creeks and canyons, gaining about 1000 ft. and losing about 1500 ft. Sometimes the trail is yards from the river and at other times so distant as to be taunting. As is the case when paddling this part of the river, the triangular form of peak 6047, near Corral Creek, is a distinctive landmark, that soberly marks progress down the river.

It is a trail that is long for its length and modest elevation gain. There are sandy stretches, rocky sections, stretches with V-ruts, steep uphill sections, and long stretches of perfectly graded downhill. About 8.5 miles into the run a striking section of trail traverses a cliff above Sock’em Dog, a class V rapid on a reach of the river named the Thunder Run.

All in all it was a enjoyable run that would be brutal in hot weather and a high sun. Even with the temperature topping out at only about 80 degrees, I was glad I took extra water!

Here’s a Google Earth image and Google Earth KMZ file of a GPS trace of our route. Near the end of the run, after crossing Bull Run Creek, various use trails have evolved. The main trail forks right and does not cross private property. The various routes can be checked out on Google Earth.