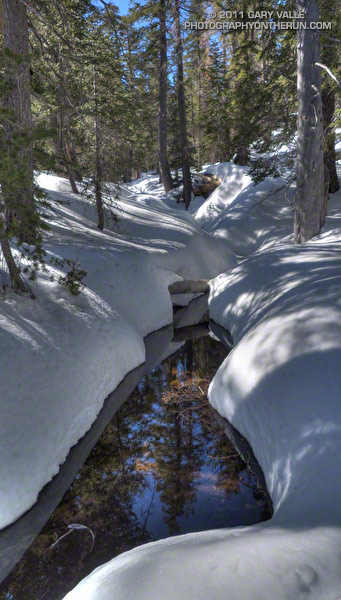 After skiing Mt. San Jacinto (10,834′) last week, Charles and I decided to take advantage of the good snow and ski the peak again today. Warming temperatures had thinned the snowpack a bit, particularly on the flats in Long Valley (8400′), but there was still plenty of snow.

The temperature was a little cooler than last week, particularly on the summit, where a brisk west wind increased the wind chill. I didn’t dig my better gloves out of the pack, and the light (knit) gloves I used for skiing up were like wearing no gloves at all. After spending fifteen cold minutes on the summit, I bailed to the south side of the peak, near the summit hut, and warmed up.

Once again, there was outstanding skiing on the sun-warmed slopes to the south and southeast of the summit. The surface of the snow had been transformed into a velvet-like layer of fine-grained corn snow. You couldn’t pick a bad line, and Charles and I would yell at each other, “you’ve got to see the snow over here!”

Conditions were more variable in the trees on the east-facing slopes above Tamarack Valley, but there were still some excellent sections out in the sun. Threading our way through the trees on the low angle slopes leading to the Round Valley Trail was fun, and in an peculiar way, so was skiing the well-traveled snowshoe track down the trail to Long Valley.

The title photo is of Long Valley Creek below Round Valley. As the snowpack melts, deep wells and moats typically form along streams. These can be anything from an inconvenience, to a life-threatening hazard that is impossible to cross. Snow bridges melt from below, as well as above, and are difficult to evaluate. It can be unnerving to cross a large Sierra creek on a snow bridge in the Spring, when no other option is available.

Here are a few additional photos. Click for a larger image and description: