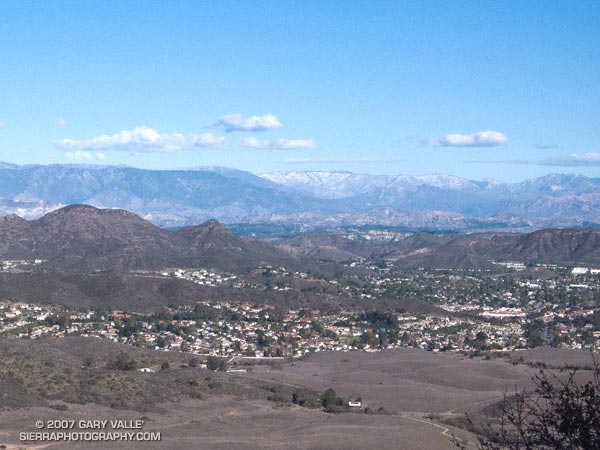 I was about a mile from the Wendy Dr. trailhead on Potrero Rd. in Newbury Park. A cold wind ruffled the chaparral, and to the north snow could be seen on McDonald Peak (6870′) and other peaks of the Ventura mountains. I was nearing the top of a rounded ridge in Rancho Sierra Vista/Satwiwa, and in a few minutes would be descending the sun-warmed Old Boney Trail into the upper reaches of Big Sycamore Canyon.

Big Sycamore Canyon extends from the ocean to within a mile or so of Potrero Rd. It forms the main trunk of an extensive network of trails in Pt. Mugu State Park. Of the many possible trail combinations, my loosely defined plan was to link some of the trails on the XTERRA Boney Mountain Trail Run course into a longer run.

The general idea was to start on the Old Boney and Blue Canyon Trails, and return via the Hidden Pond and Upper Sycamore Canyon Trails. I was looking to do about 20 miles, and wasn’t sure how far down Big Sycamore I would run, or what other trails I would do.

The run up and over the shoulder of Boney Mountain was brisk and blustery. On the way I checked out the waterfall spur trail and the Danielson cabin site and monument. At one point, several miles into the run, the trail rounded a ridge and descended into a bowl at the head of a broad canyon. Here, the character was unmistakably that of the wilderness — isolated and wild with the chaotic western escarpment of Boney Mountain towering above.

About two hours into the run I pulled into the Danielson multi-use area in Big Sycamore Canyon. There’s a water spigot here, adjacent to a fireplace in a low-walled picnic area. While topping off my Camelbak, I noticed a runner on nearby Big Sycamore Canyon road, then another, and another. A continuous stream of runners was passing by — I had forgotten that the Lasse Viren 20K was this weekend!

Down in the canyon the weather was perfect for the race. Swept along by the wave of runners, I missed my connection with the Two Foxes trail, and it wasn’t until the aid station at Wood Canyon road that I turned off the race course. Within a couple hundred yards I happened upon the southern end of the Two Foxes trail and worked my way back up the canyon about half a mile to the bottom of the Coyote Trail.

The previous evening I had taken a look at the Tom Harrison Santa Monica Mountains West Trail Map and noted that the Coyote Trail, Hidden Pond Trail, and Upper Sycamore Trail could all be linked together in one long single track extravaganza.

I had not done these three trails and enjoyed the exploratory feel. The Coyote Trail and Hidden Pond trails were outstanding, with excellent running and highline views. The Upper Sycamore trail is classically riparian, winding its way among white-barked sycamores and stream rubble, in a stream eroded canyon to its junction with the Old Boney Trail about 1.5 miles from the Wendy Drive trailhead.

Here’s a Google Earth image of a GPS trace of the approximately 19 mile route.