Trailrunners spend a lot of time outdoors, and as the hours add up so do the chances of wildlife encounters. Encounters can be as common as Nuttall’s  woodpeckers chatting it up in a oak tree, or as rare as a mountain lion bounding across a road.

The diversity of wildlife in the areas in which I run is remarkable. The wildlife section of Photography on the Run includes posts about encounters and interactions with tarantulas and other spiders, bees & wasps, butterflies, birds, various snakes, lizards, frogs, rabbits, squirrels, coyotes, deer, bighorn sheep, hawks, falcons, owls, bobcats, bears, and mountain lions.

I’ve found many animals are surprisingly tolerant  of a jogging runner. What I will call innate curiosity sometimes seems to offset primal fear. However, it is a delicate balance with a hair trigger.

Earlier this week I did an out and back run at Sage Ranch. A couple of miles into the run I ran up a short hill and then around a huge sandstone boulder. About 10 feet away, perched on the edge of a picnic table was a Cooper’s Hawk. And it didn’t fly.

I could barely breathe. The bird was stunning. Its sleek dimensions and long, barred tail suggested elegance, speed and agility. I slowly turned away and with agonizing deliberateness, removed my camera from the waist pack. As I turned back to the bird, camera in hand, it flew away.

Birds are among the toughest of creatures for me to approach and photograph. Especially with a 90 mm lens. Most are very wary and will react to motion in their direction. 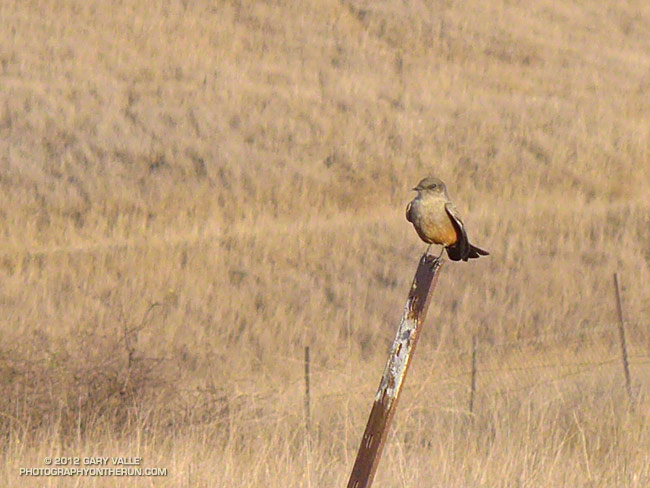 Over time you learn the habits and behaviors of the wildlife you see. There is a fence line along the dirt road on the east side of Lasky Mesa that is a favorite of flycatchers. I’ve seen two types of flycatchers at Ahmanson Ranch, the Say’s Phoebe and the Western Kingbird.  As the name suggests, flycatchers hunt insects from fence posts and other perches.

Both species react to a runner in peculiar way. The game goes like this. From some yards away I’ll see a flycatcher perched atop a fence post. The bird will wait until I am about 20 yards away — not quite close enough to get the shot I want — then fly four or five fence posts down the line and wait for me to try again. This behavior sometimes continues for a quarter-mile or more and several times has repeated until the end of the fence line.

Why? Maybe people and animals tend to stir up insects and the birds are being opportunistic.

The kingbirds in the title photo were momentarily distracted when one chased the other from the top of the post. The chasee has its crown feathers flared and wings held in a posturing display.

Update July 28, 2020. Was playing the fence-post-hopping game with a Say’s Phoebe this afternoon on Lasky Mesa. About 30 seconds into the game the bird landed on the fence with a large cricket in its beak. So maybe there is something to the idea of a runner stirring up bugs as they run along the fence line.