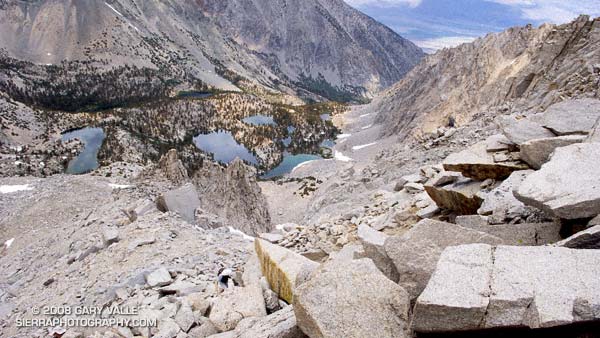 We were making good progress up the gargantuan north face of University Peak (13,632′), climbing carefully and doing our best not to knock loose rocks down on each other’s heads. We were also doing our best to ignore the gathering clouds — and the unnerving rumble of distant thunder.

Yes, it would have been better to sleep at the trailhead and get an early start. Especially with a 20% chance of isolated thunderstorms in the forecast. But we didn’t. When we should have been taking our first steps on the Kearsarge Pass trail we were eating breakfast burritos in Mojave. So it goes.

Now we were about half way up the 2200′ class 2-3 face, and it would take another hour of climbing to reach the summit. That would put us on the summit right around the time of maximum daytime heating — a bad time to top out if you’re trying to avoid a thunderstorm.

Off to the northwest there was another long, rolling, rumble of thunder. Streamers of rain could be seen twining from darkening clouds. Smoke from one or more of California’s many fires hung in the valleys to the west of the crest, producing an unnatural and eerie mixture of clouds, smoke, rain, and orange tinted terrain.

We paused in a jumble of broken blocks of granite, hemming and hawing, and otherwise hesitating to make THE decision to descend. Avoiding the issue and pondering the sky, we wondered which fire the smoke was coming from, and — half in jest — whether the smoke could have seeded and enhanced the thunderstorm we were watching. Those questions, it turns out, had surprising answers.

I had assumed the smoke was from one of the fires to the west. But this NRL Aqua-MODIS True Color satellite photo from 1:38 in the afternoon reveals the source of the smoke — it was from the Piute Fire between Lake Isabella and Tehachapi. The long plume of smoke from this fire feeds almost directly north into the large thunderstorm cluster near 37N and -118.5W.

From our vantage point on University Peak, the southern margin of this activity appeared to be about 6 miles away, somewhere near Gardiner Basin. This experimental NRL image shows the convection more clearly. Could this smoke plume have enhanced the storms over the Sierra?

The research article “Smoking Rain Clouds over the Amazon” by M. O. Andreae, et al, published in Science Magazine in 2004, and related research, suggests the possibility. According to that article, vegetation burning produces high concentrations of aerosols which are capable of nucleating cloud droplets. But, convective clouds forming in smoky air show substantially reduced droplet size compared to similar clouds in clean air. The reduced droplet size can delay the onset of precipitation, which in turn can result in enhanced convection.

So why blame the thunderstorm on Cristina? This NRL water vapor satellite photo from 3:30 p.m. suggests that the source of the moisture for the Sierra thunderstorms was Tropical Storm Cristina. An upper level low spinning off the coast had drawn the moisture up from the tropics and into the Sierra.

Related post: Thunderstorm, Shadow and Sun on University Peak (The north face is highlighted by the sun.)