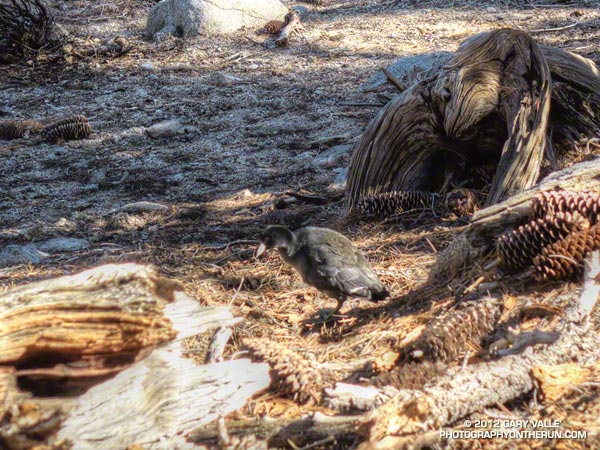 Usually found around marshes, ponds, lakes and reservoirs — often in large flocks — this solitary coot was in a conifer forest at 7300′ on Twin Peaks in the San Gabriel Mountains, near Los Angeles.

It was only a few feet in front of me when it flushed. Far too large to be a quail, at first I assumed it was a grouse, and was surprised it allowed me to approach so close.

Its wings beating furiously the bird managed to scurry downhill a few yards — perhaps briefly becoming airborne — and stop. Preening this feather and that, the bird seemed annoyed to have made such an effort, and more concerned about its feathers than me.

Its wing beats were symmetric and strong and the bird appeared to be healthy, but it was my impression its primaries were not fully formed. American coots (Fulica americana) molt in late summer and it takes about a month for them to return to flight. Maybe this bird was nearing the end of a molt and not quite ready to fly.

But why should the coot be so far from water? I think the closest lake to Twin Peaks is Cogswell Reservoir — about 5000′ lower in elevation and 5.5 miles away.