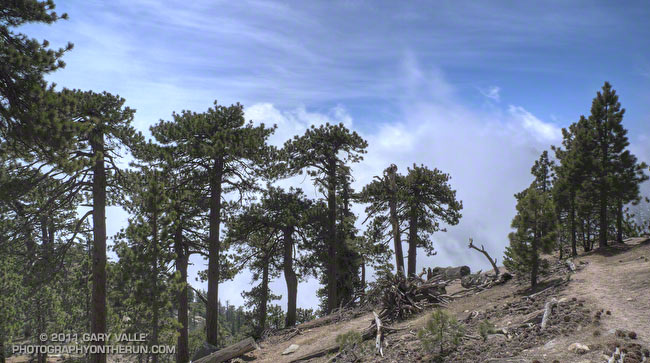 Last Sunday started with light rain in western Los Angeles County, and on the drive to the San Gabriel Mountains, I wondered if the Three Points trailhead would be above the mile deep cloud layer. It was, but barely so, and at the start of the run a couple of scuddy clouds hung over the parking lot.

These were soon left behind, and while the lowlands dealt with damp, dreary weather, my Easter morning run on the PCT continued toward Cloudburst Summit under a bright sun and mostly cloudless skies.

I encountered my first patch of snow a little past Camp Glenwood, on a shaded north-facing slope at about 6300′, nearly three miles into the run. With the above average snowpack, it would have been a surprise not to find some patchy lower elevation snow. Much more snow could be seen on the higher elevation slopes, and the big question was: how much snow would there be on the Mt. Waterman trail?

From Cloudburst Summit I continued eastward on the PCT to Cooper Canyon — one of the most idyllic places in the San Gabriel Mountains. Snowmelt had increased the streamflow, and to start the climb to Buckhorn, two creek crossings were required. It was cool enough that if I could avoid it, I didn’t want to soak my shoes. On the other hand I would rather have wet shoes, than fall bodily into a creek trying to keep them dry. A makeshift trekking pole helped prevent either scenario. Cooper Canyon Falls was spectacular.

From the campground I still couldn’t tell if the Mt. Waterman trail was going to go. There was a lot of snow on the north-facing slopes, but I was betting it wasn’t going to be as choked with snow as it looked. Worst case, I could turn around, so I decided to continue until there was some reason not to.

There was some snow, and at one point I left the trail to avoid a particularly steep snow slope. About a mile from Hwy 2, the trail worked up onto a broad east-facing ridge, and from that point the trail was mostly free of snow.

No sooner had the snow issue been resolved, when clouds began to spill over the ridges and increase overhead. I knew — or at least thought I knew — that other than decreasing the visibility and temperature, these clouds shouldn’t be a problem. Even so, I was very glad to know the terrain and route well, and have some additional gear in my pack.

The title photograph is from the upper section of the Mt. Waterman trail. The clouds are in the deep canyon between east ridge of Waterman Mountain (8038′) and Twin Peaks (7761′).