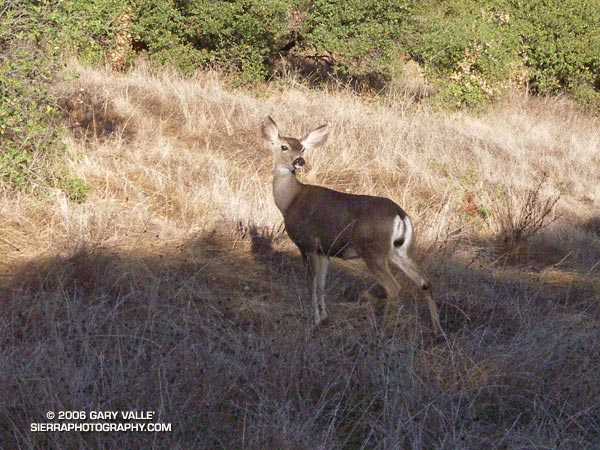 About ten feet in front of me, there was a flash of brown as a large animal leaped across the trail. In the balloon of time that accompanies a surge of adrenalin, I thought of the possibilities. The last time an animal startled me, I was running on a dirt road through ten foot tall chaparral in the Simi Hills. In that case a large bob cat had bolted from the brush.

Lingering in my mind was a trail runner’s recent encounter with a mountain lion while running at Whiting Ranch in Orange County. The last place I had seen mountain lion tracks was on a muddy nature trail, not far from where I was now. That was more than a year ago. It had rained overnight, but so far I had only seen tracks of coyote, dogs and deer.

Today, I was on the Musch Trail, doing one of my favorite cool weather runs — an approximately 12.2 mile, fire roads out, trails back course from the end of Reseda Blvd. to Trippet Ranch, in Topanga State Park.

As time warped back to normal, I saw the animal wasn’t a bob cat or mountain lion, it was a mule deer. A doe had stopped just a few feet from the trail. That was unusual. Also, it was strange that her full attention wasn’t on me. Instead, she seemed concerned about something behind her, uphill from the trail. I stood quietly and watched.

She appeared to be evaluating the situation, and after about 15 seconds seemed to calm. Still alert, another 15 seconds passed, and following some unseen cue, a six or seven month old fawn was suddenly at her side.

Now her big ears, and more of her attention, were focused on me. With the fawn at her side, she obviously didn’t like being out in the open. She scented the ground, checked her fawn, and then looked back up the hill. I couldn’t see any more deer from my position, but they could easily be hidden in the surrounding cover. Almost a minute and a half after the encounter began, the doe and fawn moved into the brush.

Slowly moving a few feet along the trail, I glanced up the hill and discovered two more members of the group, waiting for me to pass. I continued walking down the trail, and after few yards, picked up the pace, and resumed my run.