The two hikers stopped on one side of the broad chute and I stopped on the other. We were on the Pacific Crest Trail about a half-mile from Little Jimmy Campground and had paused to put on micro spikes before crossing the icy slope. It was the same chute that had been so unnerving for a couple hiking down from Little Jimmy on a chilly morning two weeks before.

After the hikers crossed we chatted for a moment about the snow. They were doing the PCT and I asked them what gear they used on Fuller Ridge — an infamous section of the trail on Mt. San Jacinto. They said they’d used micro spikes and ice axes. The segment had gone well, but at one point it had taken them four hours to do two miles!

It’s not often there’s this much snow in April in the mountains of Southern California. After venturing to Mt. Hawkins a couple of weeks ago, I had wanted to get back to the San Gabriels and check out the snow on the higher part of the crest between Mt. Burnham (8997′) and Mt. Baden-Powell (9399′).

The photo on the left is a view west along the crest from the shoulder of Mt. Baden-Powell to Mt. Burnham and Throop Peak. Strong, southerly winds that accompany Winter storms blow from left to right across the crest, depositing extra snow in the wind-shadowed lee of the ridge. Snow accumulates along the ridge in dense, deep drifts, which in a big snow year can persist well into Summer.

Today, I stayed more or less on the crest between the summit of Baden-Powell and the PCT’s junction with the Dawson Saddle Trail, using the trail and snow where possible, but avoiding big drifts and steeper snow slopes. Between Throop Peak and Islip Saddle I stayed on the trail, and used micro spikes in a couple of places.

Lower elevation snow is melting relatively rapidly, but snow on the north-facing slopes at higher elevation could be around for weeks. Some patches and drifts may last into June or July. We’ll see! 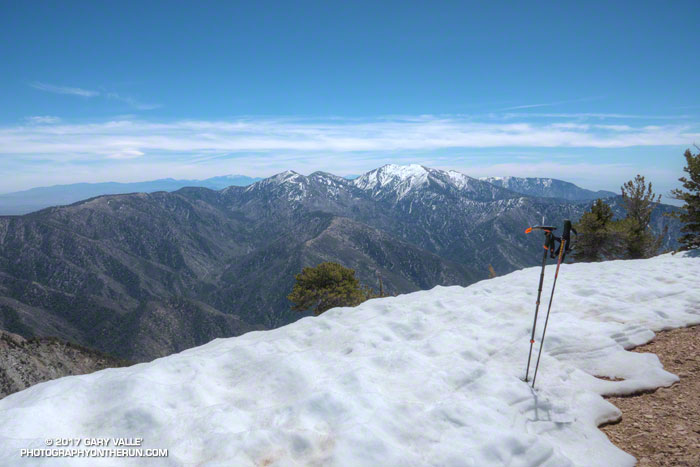 On the summit of Baden-Powell I pondered Mt. Baldy and thought about Sam and his love of the outdoors and Mt. Baldy. His effusive spirit will linger there always, and we’ll smile when we encounter it.