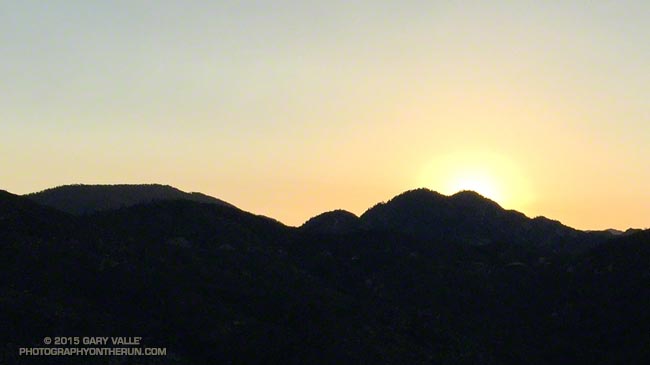 Yes, there were a few gnats; and for sure, it was little warm and muggy; and without question the Silver Moccasin Trail had a few downed trees and was a bit overgrown. It was still an excellent run!

The idea was to do a loop from Shortcut Saddle and do 20 miles or so of the Angeles Crest 100 Mile course. Craig and I were training for the AC100 and Ann was training for TransRockies and UTMB. Art, who would be crewing and pacing me at AC100, was joining us for part of the run.

Training philosophies for 100 milers vary, but one constant in most approaches is doing a marathon or longer run in the mountains most weekends — usually back-to-back with another run.

As the sun crested Twin Peaks we left Shortcut and began the 5.5 mile descent of Edison Road. The good news was we were not running up this beast. Even so, it is a long way to the bottom. That gave us plenty of time to talk about past experiences and upcoming races, and to ponder the “No entrance permitted” signs at cliff faces, culverts and other impassable places along the road.

I had expected temps to be pleasantly cool on this section, but the day had dawned clear, warm, and a little humid. Lately it seemed every run had been an AC100 heat training run and it looked like today’s run would be no exception. There wasn’t a cloud in the sky and I wondered just how hot the climb to Wilson was going to be.

Eventually the service road bottomed out at the West Fork San Gabriel River. Sadly the river was a trickle that could be easily bridged in one step.

At Newcomb Saddle we said goodbye to Art and continued over to Newcomb Pass and down the Gabrielino Trail to Chantry Flat. Once down into the shade of the tall trees in Big Santa Anita Canyon, the running was idyllic. At the Green Bridge we began the short, but steep, climb up to Chantry. At Chantry we would refill and rehydrate before continuing on the Upper Winter Creek Trail to the Mt. Wilson Trail and its junction with the Mt. Wilson Toll Road. The approximately 6.8 mile climb from the Green Bridge to the Mt. Wilson Toll Road is the longest on the AC100 course, and has the most elevation gain — over 3500′.

We did not complain when monsoonal clouds began to creep in from the east. The varying clouds brought some relief from the heat and humidity, and by the time we reached the Mt. Wilson Toll Road the temperature had dropped from the mid-eighties to the mid-seventies.

The clouds continued to thicken and as we topped out on Mt. Wilson a few rogue raindrops made it to the ground. Once again we refilled and rehydrated. From here we would follow the Mt. Disappointment 50K course backwards to West Fork. The descent down the Kenyon Devore and Gabrielino Trails to West Fork and the climb out to Shortcut would be a good simulation of the descent to Idlehour and climb to Sam Merrill on the AC100 course.

Given the severity of the drought we had wondered if the usually reliable water source at West Fork would be running. The flow from the pipe was surprisingly strong. The water wasn’t necessary to complete the run, but it sure was nice to dunk my head in the cool stream!

Another thing we had wondered about was the condition of the Silver Moccasin Trail between West Fork and Shortcut. The Mt. Disappointment 50K race has not been run on this segment since 2012 and this year is back to it’s original route. Had any trail maintenance been done?

It didn’t look like it. Craig and I had done trailwork here in 2011 and today the trail along the canyon bottom was almost unrecognizable. Recovery from the 2009 Station Fire continues and growth along the stream has been robust to say the least. If you are not into crawling over trees and navigating overgrown trails, finishing at Red Box using the Gabrielino Trail or Red Box Road would be another option.

Once away from the stream and out of the canyon bottom, the Silver Moccasin Trail returned to normal and Ann set an unrelenting pace back up to Shortcut.

According to SportTracks the loop worked out to about 31.5 miles with an elevation gain/loss of about 7600′. Here’s a Google Earth image of an overview of the route.

Related post: The Ups and Downs of the Angeles Crest 100 Mile Run